Kingfisher Sprint shell wants to be turned into a car

A virtually new Kingfisher Sprint body shell that remains unbuilt and thus never turned a wheel since it was made in Northumberland in the 1980s has turned up for sale in Vienna, Austria. Christian Schmidt made me aware of the car that is owned by a friend of him, who lives locally. He wrote: "He is in the process of streamlining his collection of classic vehicles. Main reason is as usual - too many projects, too little time! He asked me to help him with the sale and I was immediately thinking of your Maximum Mini Market."

The shell was bought with the intention to build it up as a functioning car but it never happened. Somewhere in the shell's life the body's front end had gone missing at some point and therefore a new mould was made. This mould comes with the lot, together with the bonnet, both doors and the rear hatch panel. A new owner will have to source all the rest of the (Mini) mechanicals and further parts to finish the project, including VW Beetle 1303 windscreen, Datsun 120Y Coupe rear screen and Ford Capri rear lights as these were fitted to the cars built by Kingfisher instigator Roger King. King sold approximately 35 Sprints between 1981 and 1984.
For more details see the ad here. 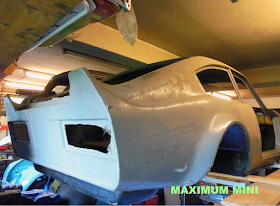 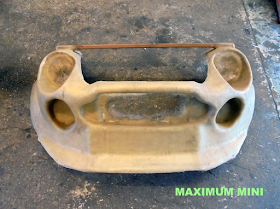 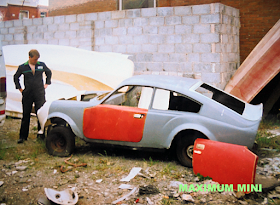 What have I done..? Kingfisher body shell when it was picked up many years ago
Picture via Christian Schmidt 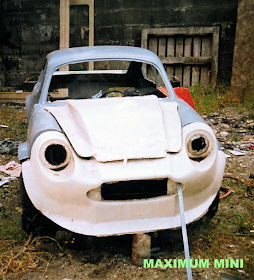 About 35 Kingfisher Sprints were made, and this one never turned a wheel
Picture via Christian Schmidt