Oops! Let's say there must have been a bit of a language barrier when Mike Gensemeyer told me about yesterday's Deep Sanderson stating the car used no coil springs in the rear suspension. It is, of course all part of the Lawrence link suspension system. The car may use coil springs at the rear when it's finished, as it will continue to use the Mini's rubber balls, too. I found a sketch of the system that explains it a little more. Originally the system did not use any coil springs at all but all the cars that I have seen came with the later modification of coil springs around the dampers.
Former 301 owner Guy Loveridge wrote: "I suspect someone, who did not understand/could not make the Lawrence Link work properly tried to replace the rear suspension with coil springs - that's the problem really, I only know/knew 2 people who could make that system work - witness Goodwood 2009 - Chris set my car up, and Richard went his own way - result: - My car runs in the top 10 and comes home in 11th, Richard's is destroyed at the chicane as he could not catch the back end as it came around!" See the drawing below how it's meant to be. 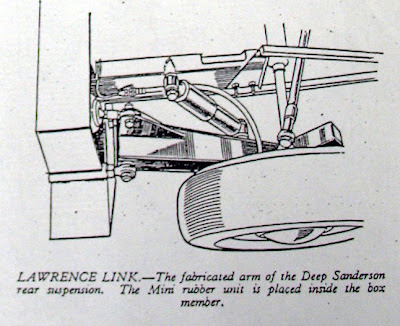 The Lawrence Link explained. It uses the rubber ball springs with its own arms
Source: Small Car magazine

Furthermore, I understand now that the car made it to the Zandvoort track after the 1983 outing that I mentioned yesterday. According to Ben Alberts it could be seen at a historic race festival there, probably in 1988. And he sent over a few pictures that he made of it at that particular event, too. Another picture of the car, made by Andre Reuvenkamp, was clearly taken at the same day. All three of them below. Do let me know if the story needs any other amendments! 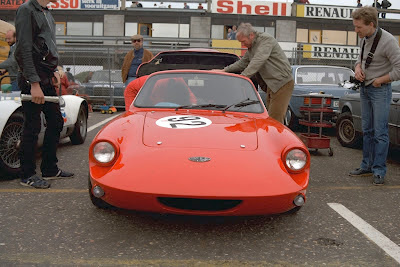 This picture of the German Deep Sanderson 301 was to be found on the web for a while
Picture: Andre Reuvenkamp 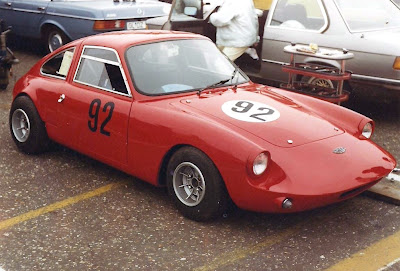 But thanks to Ben Alberts we now know it was taken at Zandvoort, probably in 1988
Picture: Ben Alberts 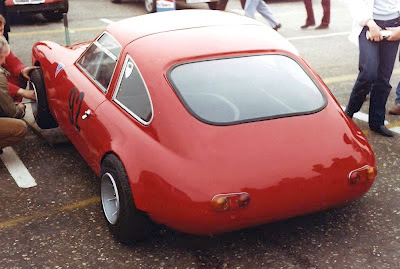 The exhaust pipe usually runs through the rear body work, but not on this car
Picture: Ben Alberts