Wicker sided Minis: not just from the coachbuilders

A number of old snippets and advertisements may throw a new light on cars believed to be 1960s coachbuilt Minis by Hooper and Radford in the UK or Taka-Hira in France. This as there were a number of companies offering wicker trim for application to these cars. From one article: "At the last Paris salon a Mini-Minor was shown with painted basket-woerk on the body and it set a fashion-pace in cars which is outmoding any romotion colour. This transfer method is widely used both in France and America."

I think the salon they mention must have been the 1961 Paris Motor Show, where Taka-Hira showed a cool Mini saloon, which was also featured prominently in Paris Match magazine. Two British companies which offered wicker in a number of colours and varieties called their products 'Wickertrim' and 'Shamkane' and there was also Humphrey Metcalfe in London who was happy to do the conversion and offered it in three colours, too. 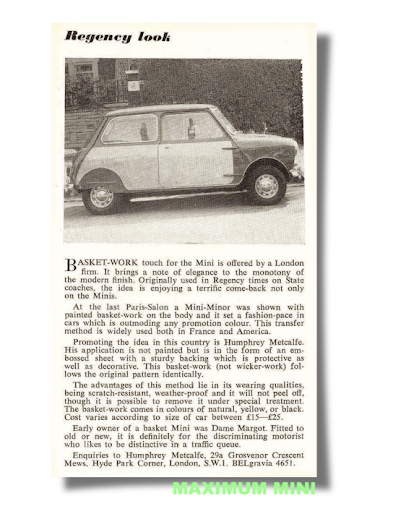 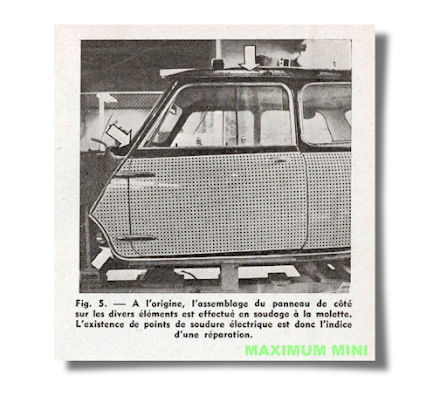 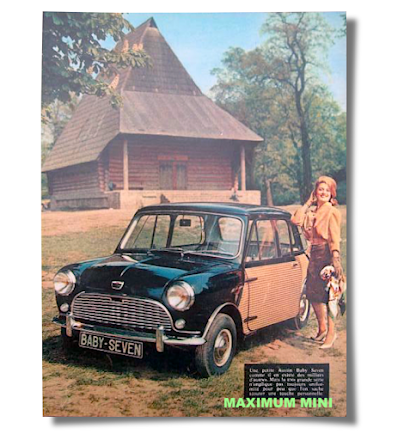 And another French clipping. A Taka-Hira Mini, or someone else's..?
Picture Jeroen Booij archive 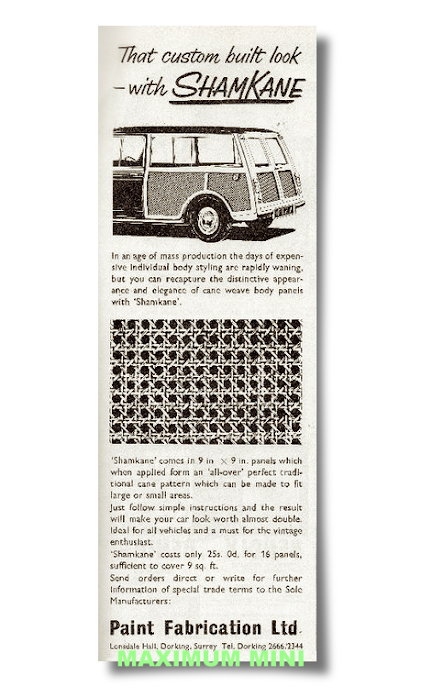 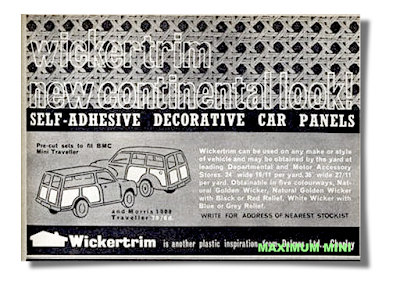 Easter is all about eggs and buns, ham and lamb and spending some time with the family. If you enjoy reading old murky magazines, like I do, it may be a good moment to do so, too. I found the three mags below, making good use of what looks to be the same photoshoot with a Mini Beach Car. Happy Easter!
Easter reading: 3 x Motor magazine featuring the same Mini Beach Car in 1964, 1965 and 1968
Picture Jeroen Booij archive
Geplaatst door Maximum Mini op 14:58 0 reacties

Unipower GT ready for the season

The freshly restored and ex-Peter Filby Unipower GT of Howard Darby and Bob Neville just had its shakedown and Howard was so kind to share some (moving) images of the car. He added: "Bob had to do some checks on his McLaren 720 last Monday so we decided to shakedown the Unipower GT at the same time. The car is now entered at Prescott for a hill climb on May 14th". It is looking fantastic in its all-Easter hue - all the best in May chaps! 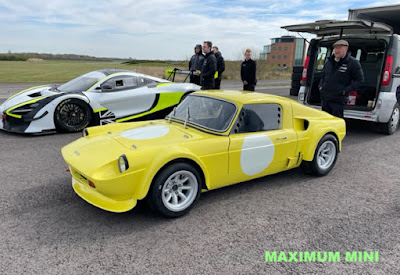 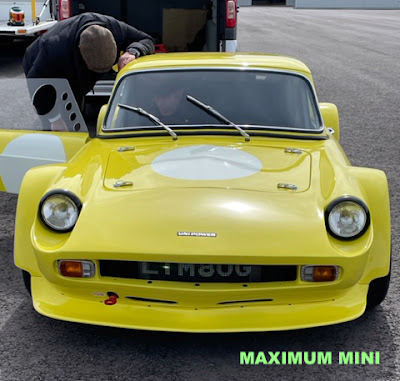 The car is built up as a racer but is road legal on its original plate, too
Picture courtesy Howard Darby 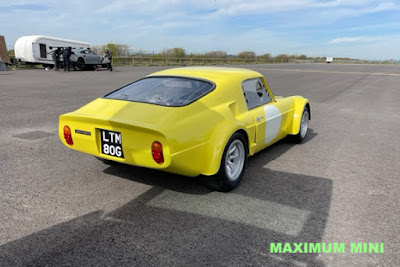 New Mini based cars keep on popping up

I'm regularly asked wether I still hear of Mini based cars new to me. The answer, without a doubt, is yes. After Maximum Mini 3 was finished in 2016 I've kept a folder with new discoveries and it counts over a 100 new-found cars by this time. Yes, I've been thinking of a new book.

Last week alone two cars I'd never heard of before were brought to my attention. First of them was an Estate named Nifty, which was supposedly only seen at the 1984 Stoneleigh Kit Car show, where it was photographed by Richard Axtell. I have asked around but very little appears to be known about it. According to Steve Hole the company behind it was named Nifty Cars, but that's all he could ad. Chris Rees did have a nice anecdote though. He wrote: "This is a great discovery! I was a young journalist at Stoneleigh that year and was told by Peter Filby not to take any pictures of it as it wasn't important. I've regretted it ever since..."

Second discovery came from the USA and I was made aware of it by a number of readers (thank you all!). It's an ultra-low open-wheel two-seater sports racer with the Mini engine at the back and was offered for sale in Coldspring, Texas. Once again information was very scarce. From the ad: "Custom built open wheel car. What you see is what you get. We know nothing about it, used to run years ago, the man building it passed away and we are selling it for his wife. No title." As always, I'd love to learn a little more about the both of them... And keep those messages coming. 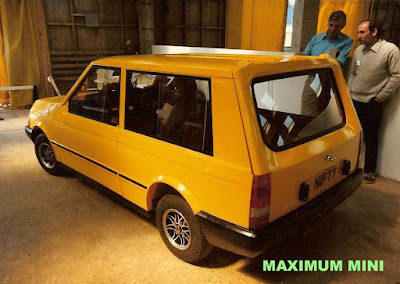 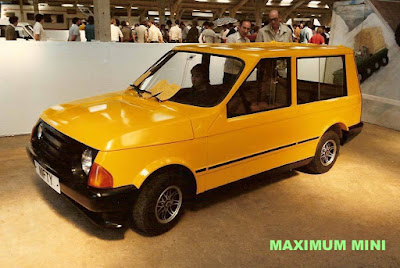 ...Only to disappear right after its launch. What happened to Nifty Cars..?
Picture Richard Axtell 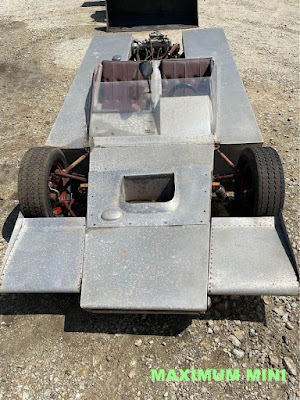 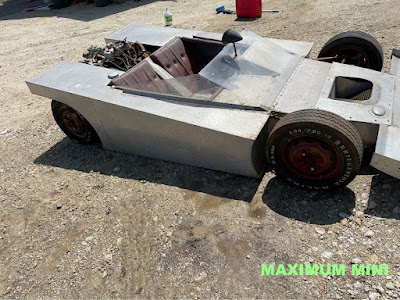 It's not a car I have come across before - I think. Who knows more about it?
Picture Jamie Trogus-Durdin 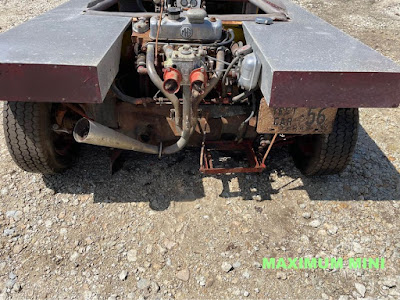 No less than four Mini based sports cars can be seen in action at the Goodwood Members' Meeting this very weekend and how nice to park all four of them next to each other in the paddock! All the best gentlemen! They are, from left to right: 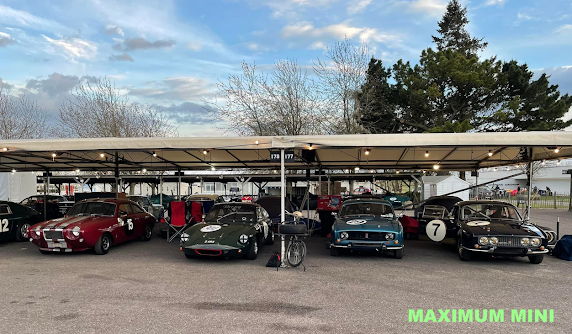 It's all smiles for the boys pushing that Mk1 Scamp up to a higher part of the flooded road, but perhaps not so much for the people of New South Wales in Australia today. Torrential rain causes flash floodings in Sydney, with even bridges being threatened to submerge. Evacuation orders have made thousands of people leave their homes. All the best to Maximum Mini readers in that part of the world. 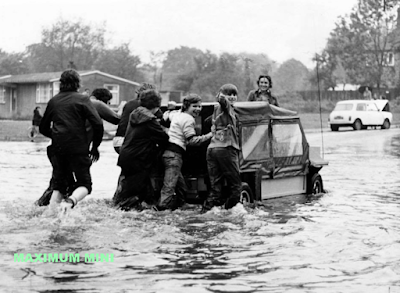 A Mk1 Scamp fails to ford a flooded road on its own. The Mini suffered, too..?
Picture Jeroen Booij archive
Geplaatst door Maximum Mini op 09:17 0 reacties