On the street where you live...

I like this sort of message, this one coming from John McKie: "Here are three of the Mini/Metro based kit cars from my street in Craghead, Durham. A Midas gold, a Domino Pimlico, which I own, and I think the other one is a Nomad. You could probably confirm that as I haven't been able to catch the owner as yet. Best, John McKie." That, indeed is a Foers Nomad, John. It's appears to have an extra long wheel base with its four doors. And it doesn't wear the spoilers like the last one spotted here. Thanks, John! 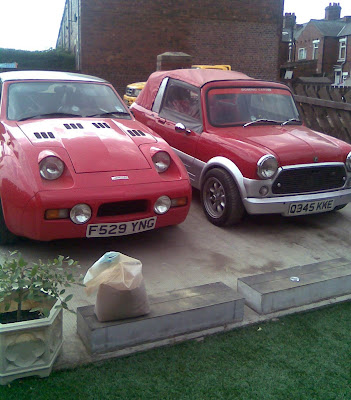 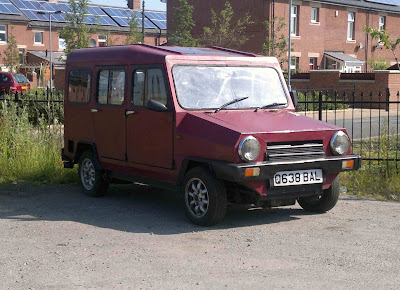 Further down the road in Craghead: a Four-door Foers Nomad on Q-plates
Picture courtesy John McKie

Chasing Ferraris at a wet Monza

You know there are a few cars I'd love to track down one day, and the infamous Mini Marcos built by Jean-Claude Hrubon and raced at Le Mans in 1966 is one of them. The car is still missing, but maybe one day... Anyway: we know it was shaken down at Montlhery on 2 April 1966 and tested at Le Mans on 4 April, but before making it to the 24-hour race in France, it went to Italy, too. On 23 May of 1966 it was entered in the Monza 1000 kilometres race with Jean-Louis Marnat and Jean-Pierre Jabouille as drivers. In fact the tiny little team was invited to go there by ex-Scuderia Ferrari man Romolo Tavoni, who'd seen the little blue racer at Montlhery. Prior to the race the Mini Marcos received an extra big home made radiator to cope with the hot Italian weather, but when race day came there was no sun to be seen. In fact a torrential rain started just before the flag fell, making it really hard to see where to go. The car set a lap time of 4:08.700 and had to start from the 39th place on the grid. Certainly not the best spot and with many big Ferraris, Cobras, Porsches, GT40s and Corvettes in front spraying water all over the tiny Mini Marcos it must have been a pretty scary drive. Marnat and Jabouille never the less coped well, despite leaving the track a few times. But unfortunately they didn't class and went home with empty hands. There aren't too many pictures around of the Mini Marcos in this race, but Richard Heseltine found one recently. And what a gorgeous shot it is. Thanks Richard! 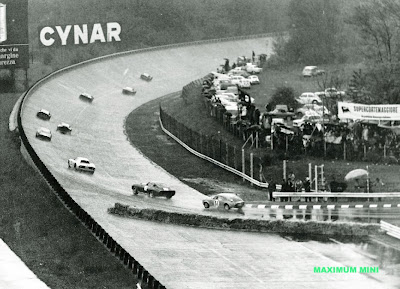 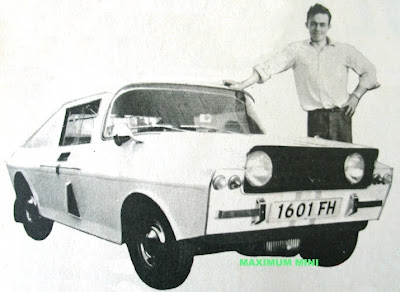 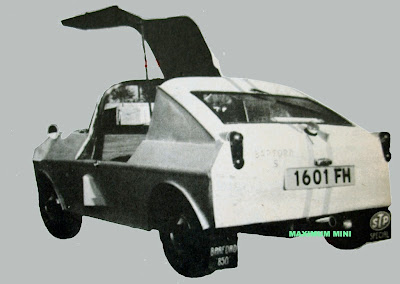 Le Mans (and back) in a Nimbus Coupe

Friend of this blog and fan of 1980s Mini based stuff (here's one of them), Wil Ker, made a trip to Le Mans recently - in his ultra rare Nimbus Coupe, you'll have to admire him for that! Next, he wrote a report about it, too, for these pages. So Wil is a good man. He wrote: "Hi Jeroen. A few weeks has gone by since Le Mans 2013, but we made it there and back in the Nimbus relatively trouble free. We set off on the Thursday morning, meeting our fellow travelers at Maidstone services on the M20 (a Clan Crusader and three guys on bikes), then we headed off to the the Chunnel. The first hour or so was fine, the car is comfy, if hot and noisy. The coolant pipes run uninsulated from the front mounted radiator through the centre tunnel and the engine is only separated from the cabin via a thin piece of perspex. The problem was, that as time went on, the fueling was getting leaner and leaner, eventually after a prolonged queue at the peage the car Kangaroo'd to a stop as we tried to pull away. This was a little embarrassing as we pushed it to the side of the road trying to avoid Lamborghinis and Ferraris blasting past us!"

"After a bit of poking around I decided that the fuel in the tank had got too hot. Basically the tank sits 10cm behind the radiator with no heat shielding, the fuel was about 40 degrees!! The bonnet was removed and went in the roof box and we set off again, this seemed to keep the fuel a little cooler. The other problem was the oil temperature, it was steady at 130 degrees. Although it has an oil cooler, there is no air-flow through it making it useless. Both these issues have never been a problem in the UK temperatures. The final problem was as I started the car to pop out for fresh beer supplies on the Saturday morning. The high oil pressure caused one of the pipes on the oil cooler to pop off, dumping the oil in a nice line across the campsite! Still an easy fix."

"The trip home was a long slog, leaving at 13:30 and arriving home at 01:30, but the car never missed a beat. I have a few ideas how to make improvements - oil/water cooler rather than oil/air, and a new fuel tank out of the way from the radiator for a start. Some internal sound deadening and heat insulation will also make the car more useable. Cheers, Wil" Well, it seems like you've done a great job in restoring the car in the first place, mate. Could this be the only Nimbus Coupe that's actually being used? I'd love to be proven wrong, and I'm sure that goes for Wil, too. Thanks again! 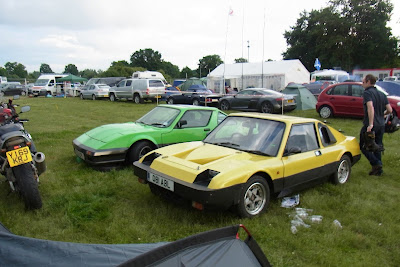 Empty beer bottles, quirky kit cars and bikers in tents. It can only be Le Mans
Picture courtesy Wil Ker 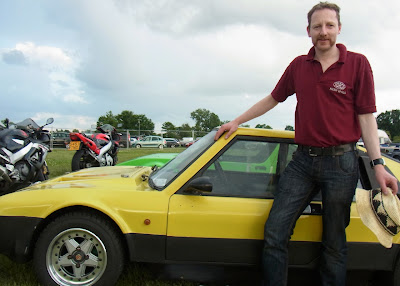 The Nimbus got hot but Wil remained cool as ever. You can leave your hat on, pal
Picture courtesy Wil Ker 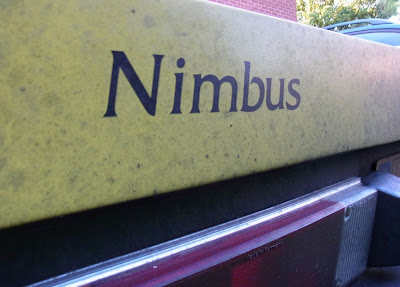 French muck on Coupe's rear. Hang on, do those rear lights read 'Made in Germany'?
Picture courtesy Wil Ker

Siva Buggies in France and Holland

French magazine 'Maxi-Austin' spends no less then 6 pages to a British registered Siva Moonbug in their current issue. The pictures are nice but the words do not shed any new light on the car. It does mention the Euromotor company, too, which built the car under the Siva Moonbug name in The Netherlands in the mid-1970s. Some time ago I wrote that I couldn't find anything more about them (frustratingly, as I used to live close to where they supposedly were based - more here). But now that time has come. In fact, Euromotor wasn't based in Amsterdam but in Amstelveen - a village close by, or so I found. They also had a dealer in Baarn, some 40-odd miles east from Amsterdam/Amstelveen. Apart from a period ad, I came across a rare Dutch brochure and found that Euromotor were importing the Mini-based Scamp in Mk1 configuration to The Low Countries, too. Presumably they sold four of these but I have never seen one. Who has? 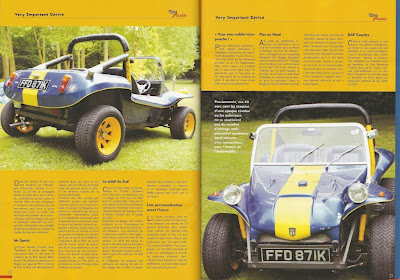 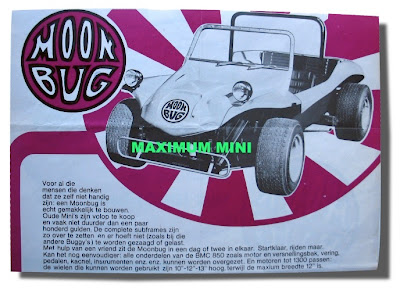 Restoration of the one and only Australian-built Broadspeed GTS is getting on well. After it had been stripped (story here) it is now painted and ready for rebuilding. Meanwhile, owner Jono Morris had a visit of the man who originally built it - Brian Foley - plus that other legendary Aussie Mini coupe builder Bill Buckle earlier this week. Jono wrote: "Hi Jeroen, I was very lucky to have both Bill Buckle and Brian Foley drop in yesterday to see the Broadspeed. We went out for lunch after and I was able to listen to some great stories about the old days and their cars. It was a very memorable day!" Isn't it great when old cars and their creators are reunited after all those years? Oh, and by the way, there is a lot more Broadspeed GT news on its way, so keep an eye on these pages if you like these cars... 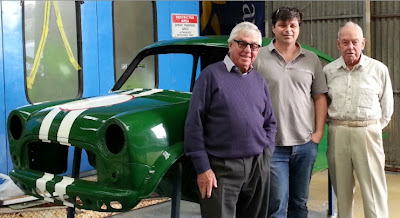 Looking for a flashy colour scheme for your Mini derivative? Think twice when you are going the Gulf way as you won't be on your own. I counted no less than 9 Mini Marcosses in Gulf livery on the Mini Marcos Owners Club website. And then there are several more, too. Below you'll find some more. 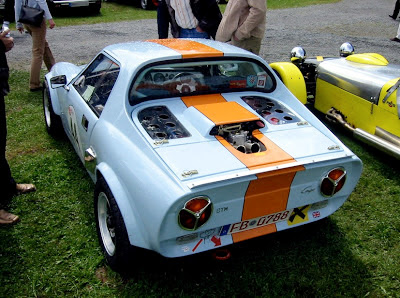 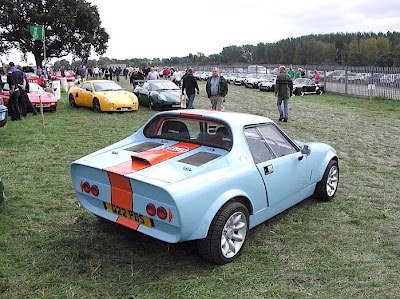 Calmer example from the UK. The Gulf colours do suit the GTM good though 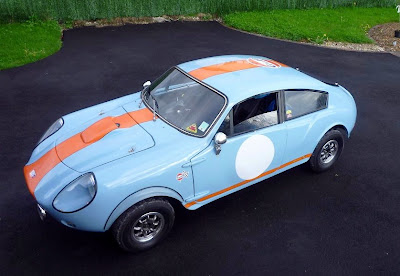 This Mini Jem Mk2 from France is well-known (and for sale, too - click here) 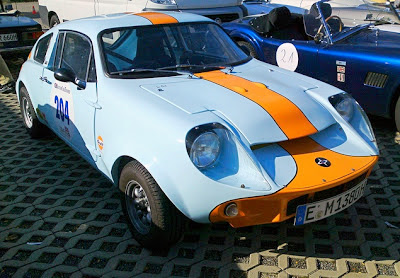 One of many Mini Marcosses in Gulf livery, this is a Mk3 from Germany 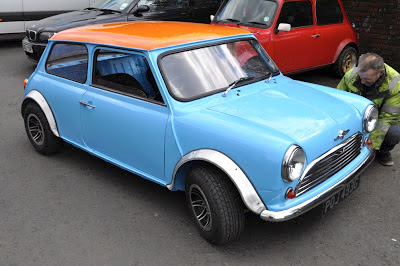 This is a home built and very low MiniSprint. I like it despite te arches 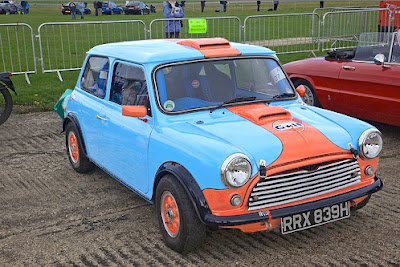 And a Hawk Sprint with the signature striping. Orange details perhaps too much? 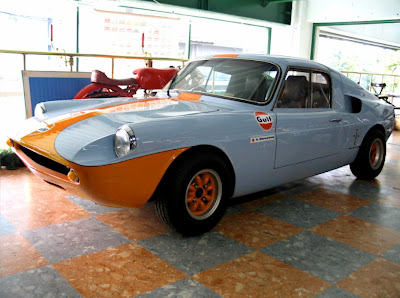 I saw this Unipower GT in Japan, the car's shapes come closest to the GT40 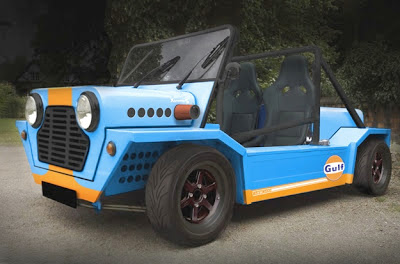 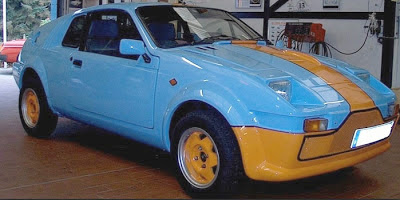 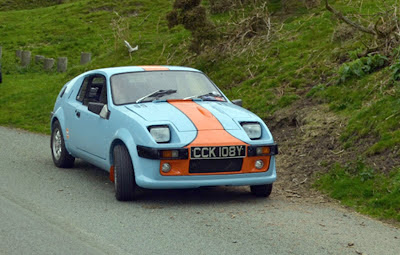 And one more Midas, now from the UK. Note the different Gulf pattern

Email ThisBlogThis!Share to TwitterShare to FacebookShare to Pinterest
Labels: GTM, Midas, Minus Mini

It's Maximum Mini movie time once more, as I keep on stumbling upon exploitation films with Mini based cars in them. We've seen a James Bond spoof, a French Nouvelle Vague flick, a Spanish comic book adaptiation and a British Science Fiction movie, all featuring some very unusual Mini powered creatures. But where is Hollywood in this list? Don't look further as I've found it. Below you'll find a scene from 'The Village of the Giants' - your typical mid-1960's American B-movie, made for the drive in. It's about a group of partying teens who get lost in a California village, turn into giants and start terrorizing the village folk. Now that is a plot.

The cool bit comes when Surfite comes in, my favourite vehicle from 'Kalifornia Kar Kustomizer' Ed Roth. The late Roth built the car in 1964 after he found a Mini (not a Cooper) in a scrap yard. It's an asymetric single seater with a very short wheelbase and surfboard carrier next to the driver. I understand that Village of the Giants is not the only movie it appears in - it also speeds along in this other gem of the Beach Party film genre: Beach Blanket Bingo. That one is about a motorcycle gang kidnapping a pop star who is finally rescued by a mermaid named Lorelei... Surfite lives in the National Automobile Museum in Reno, Nevada these days. 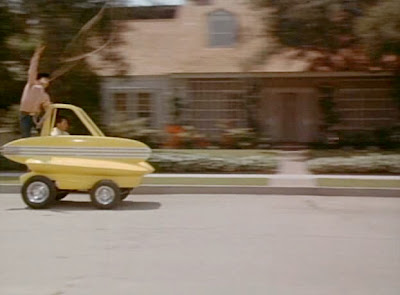 Ed Roth's Surfite can only carry a board and a surfer, well... maybe two
Picture courtesy imcdb.com 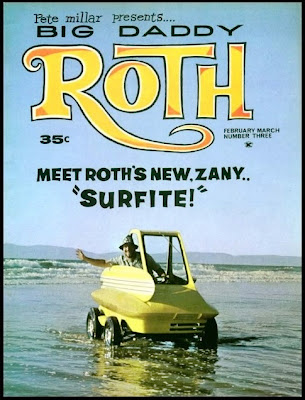 Surfite is said to have a 1269cc Mini engine, although it was based on a Mini 850
Picture courtesy tumbler.com