Deep Sanderson 301s gets a regular mention here (click!) but how about the open-top prototype preceding the production model? I found that there's not even a single post dedicated to that intriguing little car. Time to set that straight. Let's start with some pictures of the car when it was just finished and hadn't even been painted and some information from the horses mouth, quoted from Christopher Lawrence's biography 'Morgan Maverick':

"In the autumn of 1960, after the technical success of the Lawrence Link Formula Junior, Len Bridge became very determined that we should all our acquired experience by putting it into the design of a two-seater road car as an attempt at some serious production. He thought the market for racing cars was limited and already well catered for, but that there were many more people out there who bought two-seater sports cars for the road. I was not all that keen at first, but warmed to the idea after discussing it with an old friend from my Navy days, Andrew Wallace. (...) He studies my Lawrence Link suspension and proposed a sheet metal construction with a central backbone or tunnel. Len Bridge was keen to use the Mini engine which was all the rage at the time, but fitted in the rear. Andrew then took a real interest in the idea and drew up a suggested chassis design that was as original as the suspension. With some re-arrangement for practical reasons, that is what the prototype Deep Sanderson 301 was based on.

"Our first attempt at the bodywork, built for us by Charlie Williams at Williams and Pritchard, was not very clever. Ugly but functional, you might say, with its ultra light backbone chassis, all in 20 gauge steel, and his aluminium body, it was very snappy despite only having an 850ccc engine."

The car went on to the Racing Car Show and made it to a number of races before being crashed and written off. More on that is soon to follow. 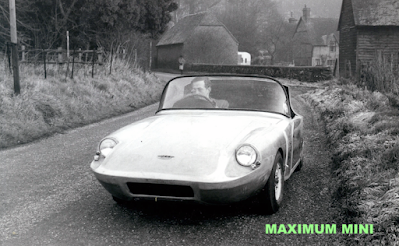 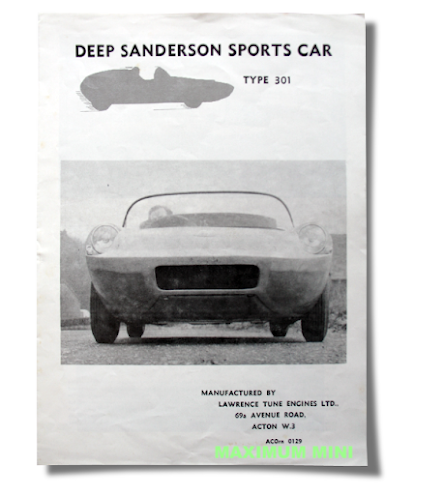 Same setting for the brochure pictures. Made hastily in time for the 1962 Racing Car Show
Picture Jeroen Booij archive 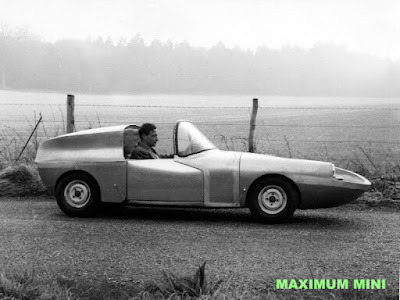 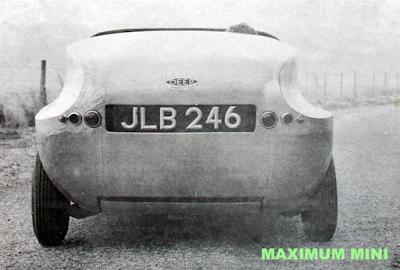 Rounded back with 'scallops' for some kind of rear view. 'JLB 246' may have been the Mini donor?
Picture Jeroen Booij archive
Geplaatst door Maximum Mini op 15:19 2 reacties

If you, like me, ever wondered what the differences in shape and size are between the standard Mini saloon and the Ogle SX1000: this is it. I took drawings from The Autocar of both cars, got rid of all the arrows and numbers and projected what was left on each other to see how they compare from the side and from the top. The (wheel)base hasn't changed a bit, but the rest of the car certainly has. 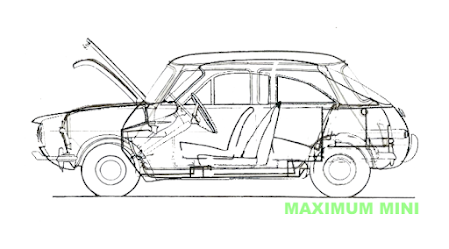 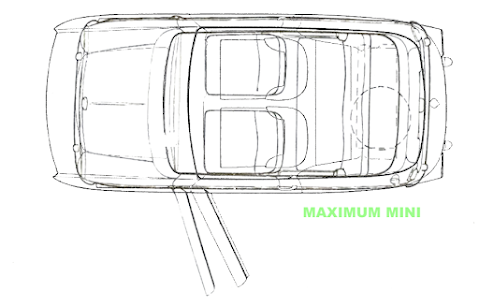 When the square nosed Mini Clubman made it to the scene in the 1970s, several companies started offering fibreglass nose sections to update your classic 'round nose' Mini in Clubman style. The Status Mo. Co. of Brian Luff was just one of them. But when the Austin Metro arrived Luff had an even bolder idea. Why not make a kit to 'Metrofy' an old Mini? I found an undated sketch in the files with that idea from his hand. It was named the Status Minnow or Mk3 Mini Minus. 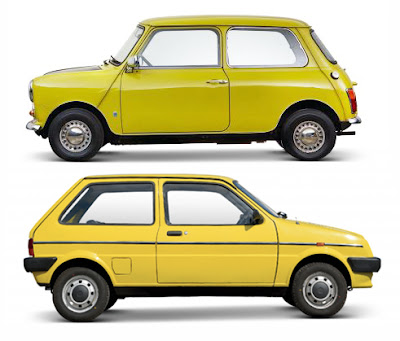 The Mini and the Metro. Was there ever a cross between the two?
Pictures Classic & Sports Car / BMW 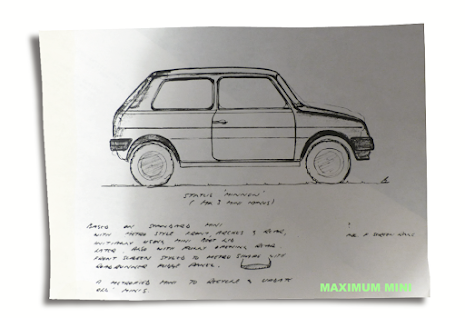 There you go: the Status 'Minnow' or Mk3 Mini Minus was to fill the gap
Picture Jeroen Booij archive
Geplaatst door Maximum Mini op 18:38 2 reacties

This car has found its way to Maximum Mini several times before. Last time was in 2015 (click here), when it was offered for sale in Connecticut, USA. I always thought it to be an ABS coupe-conversion but its background story was slightly different. ABS boss Tony Bucknall told me at the time it was made from the same moulding, but: "This is one of the conversions done by a company in Norfolk. I purchased a really strange set of body kit moulds and the roof moulding from a gentleman who had ceased trading several years prior. The only images I have seen where that Clubman which was used on a black and white advertising flyer."
Well, now that the car has been offered for sale once again, this time with auctioneers Barret Jackson, the mystery of that Norfolk company seems to be solved. From the ad: "The roof was replaced with a fiberglass unit. This alteration changed the roofline behind the front seats, making it more streamlined. The work was done early in the car's life in Norfolk, U.K., by Browne & Sons Ltd." The car was sold in auction last weekend, see the ad here. 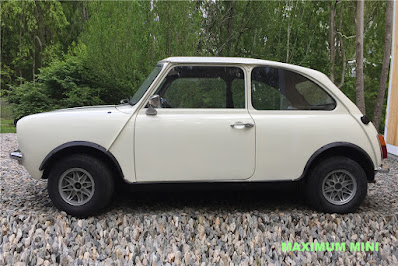 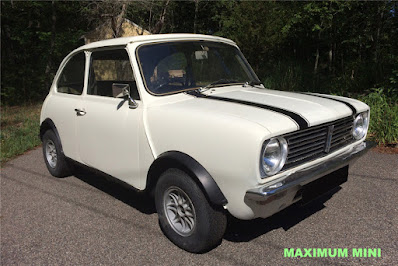 The car supposedly made it to a flyer also. Anyone here who has a copy of that?
Picture Barret Jackson auctioneers 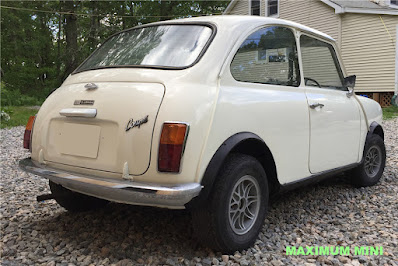 ABS took over the roof moulds and made a few also, but it remains a real rarity
Picture Barret Jackson auctioneers

Auto crossing or stage rallying can be rough sports for cars such as a Peel Viking, a Mini Jem, an Ogle SX1000, a Cox GTM or a Magenta or even a Status 365. I can't remember having seen pictures of a Mini Marcos covered in mud from a rally though. But Yuk Hodgson proves it has been done, although it is perhaps not the ideal vehicle. He added: "Yup. Young, daft, no talent, less money, but keen, 1340cc, split 45 Webers, competition everything and lsd. Phew, it was a handful. Weighed as much as a bag of crisps, bloody dangerous!" Have a good weekend folks.
UPDATE 17:50 - John Mellors writes: "A road rally would you believe. Not quite so grand a spec either. 1275, twin SUs, no LSD and not quite so light with full roll cage and underfloor plating. Quiet a handful though. How do I know all this? I was the driver!" Thank you John! 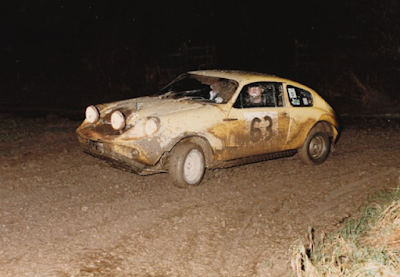 Where is this Japanese Ogle SX1000?

Your help is needed. I am looking for more information about this particular Ogle SX1000. The car wears chassis number MO/62/021 and was registered '992 VWL' when it was in the UK. Last seen in a 1986 ad when it was offered for sale from Biggleswade, Bedfordfordshire. It is believed to have been sold to Japan next and is probably still there. Who knows more about it? Any information would be much appreciated. 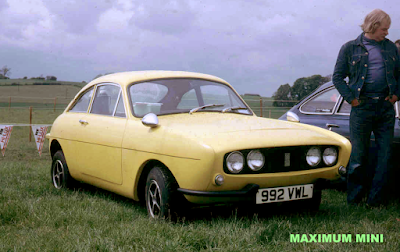 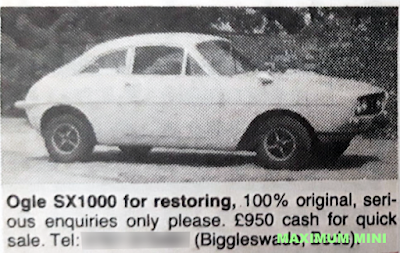 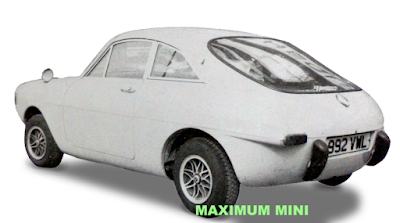 And from the rear. '992 VWL' supposedly went to Japan. But where is it now?
Picture Jeroen Booij archive
Geplaatst door Maximum Mini op 12:59 0 reacties

What could have been: the 1960 SCG Urbansport

Some years ago I wrote an article for The Automobile about the earliest Mini based (sports) cars that are known. Both the Butterfield Musketeer, Deep Sanderson 301 as well as the Ogle Mini have all been mentioned as being the first, but you'd be surprised that there have been several earlier attempts, going even back to 1959!

I'd all forgotten about this particular one: the SCG Urbansport, dreamt up by American (!) motoring magazine Sports Car Guide as early as in March 1960. Their contributor Robert Cumberford described it as ‘A dream sportster for the city man’. Cumberford came from the GM design department where he’d been working on the Corvette and would become a highly respected designer and journalist in his later life, designing the beautiful Griffith 600, which would become the Intermeccanica Italia later also. His Urbansport was a Mini based four-seat roadster with a hardtop as an extra. It used pop-up headlights and Italianesque lines. It would have been a great little car, but it never materialized.

Roadster or hardtop - the sports car was meant to be based on the new Mini 850
Picture Robert Cumberford / SCG, Jeroen Booij archive 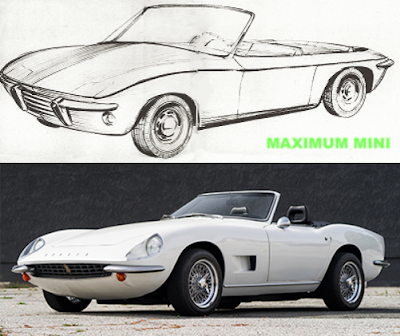 After a long search the Micron GT was finally found in March 2020 (click here). But the search for the car's creator Brian Bray continued. First there were some stories from the boy next door, who was 11 when Bray, his neighbour built it (here), followed by the man himself in October this year (here). The only thing missing now was more information about the rumoured Micron GT Mk2. Brian Bray's son Matthew told me the following: "Yes, there was a Mk2 which I did see and it was a much better looking car with opening doors. But it was never finished and sold incomplete so not sure about that one or whether it was ever completed?"

Imagine my surprise when Matthew came back more recently with the following: "Morning Jeroen. Whilst looking for something else I came across these photographs of the Micron Mk2. I thought you would be interested to see them? I think it would have been a good looking car completed. Whether or not it still exists somewhere - I have no idea. I would be very interested to hear if it turned up somewhere. Best wishes, Matthew."

You bet I liked that! The car is indeed very different from the GT Mk1 and I must say it did look good. Although these pictures are worn, the car's chassis and body construction are well visible as is the Mini powertrain, placed directly into the chassis frame. Interestingly, the shape of the car's body does remind me of another low-volume car of the mid-1970s called the Strada 4/88. That was built in a number of three in Suffolk, but it used Ford power. I showed a picture to Matthew, who replied: "Wow! Uncanny resemblance."

Wouldn't it be fantastic to find this car back, too..? 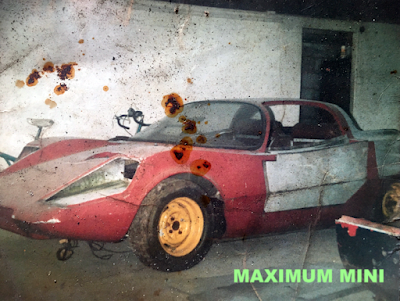 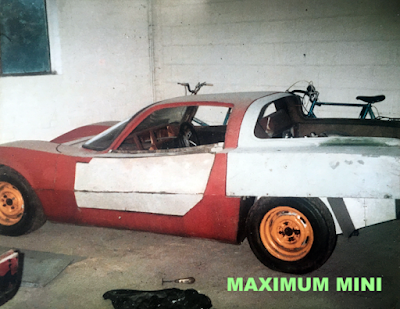 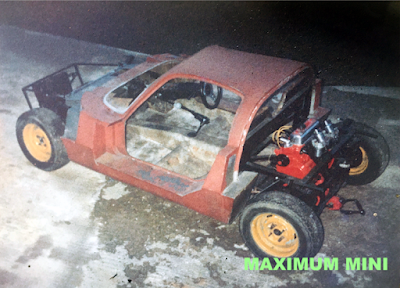 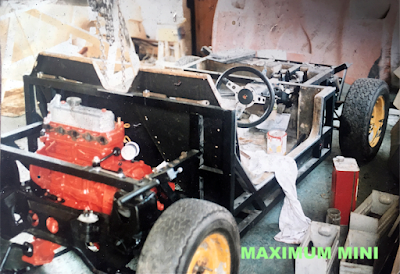 But the full chassis is visible here, as there is no doubt that the car was Mini powered
Picture courtesy Matthew Bray 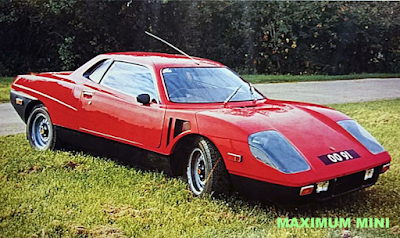 The Japanese famously love Mini based (sports) cars and they appreciate art, too. Combining those two has resulted in some great paintings and drawings before. Last year saw these drawings of Mini based sports cars from the hand of Endo Izuru. Quite a longer time ago we saw these ones from Chitoshi Tamura. Unfortunately I do not know who made the drawings seen below here, but I do know they were made by another fan of Mini derivatives from Japan. Please let me know if you happen to know who the artist is as he deserves the credits for these drawings. 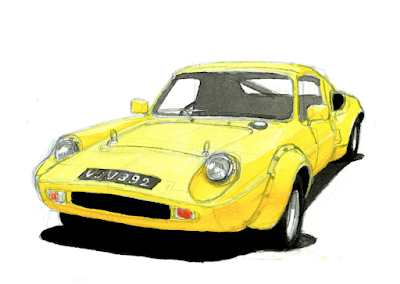 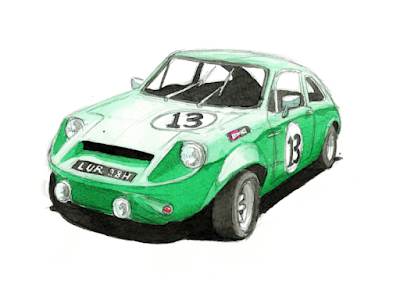 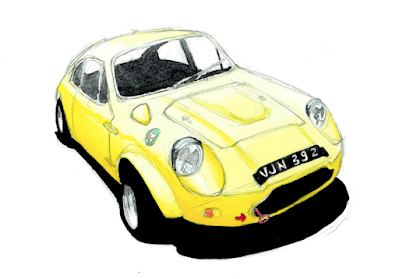 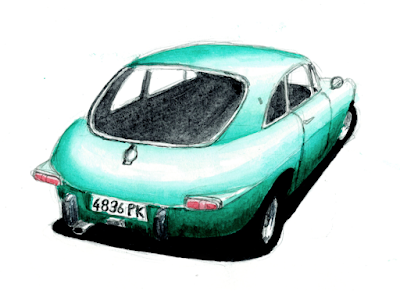