Australian Ogle being restored and researched

A cool message from Down Under, where Neil Griffin is restoring the Ogle SX1000 previously seen here. Neil wrote: "Greetings Jeroen, a few updates on the Ogle restoration. The car is now stripped of just about everything bar the Mini chassis and Ogle body... including the blue paint which I am not sorry to see go. We have also removed some newly boxed in sections under the side sills and lower rear which had also been filled with expanding foam which I believe Arthur had done during his last 'restoration'. Fortunately the car hadn't been driven much during that time it seems and so there was little water ingress and so just superficial rusting of the underlying Mini metal work."

"So with the removal of a 'triple layered' footwell floor section, we are now pretty much at the base vehicle and ready to build it back up. Overall the Mini metal work is in pretty good condition apart from numerous holes and cuts that have been made for various purposes which will all be put right. The GRP body has a number of issues expected for the age of the vehicle and we are probably looking at replace the whole front section (forward of the A-pillar). It would probably be cheaper to get a body from Nostalgia Cars but we want to keep as much of the original Ogle as possible. Fortunately we have a highly talented GRP person on hand to do the work required."

"I had hoped to be able to tell you that we had nailed down the original owner as 'Tunku Datuk Putra Mudzaffar bin Tunku Mustapha' but after correspondence with one of his sons, I can report that Tunku Mudzaffar was not the original owner but interestingly he did remember dealing with Arthur Rogers back in the day in relation to British cars. I can only assume that Arthur had confused Tunku Mudzaffar with a 'Chinese rubber plantation owner' even though he seemed to confirm my research when I spoke to him in January.

I was so sure that Tunku Madazaffer was the owner as he had spent time in London in the early 60s at the Chelsea College of Aeronautical and Automobile Engineering in London at would have the potential of seeing an Ogle back then. 'All of the ducks were lined up' as they say. I'm sure the Dutch have a similar saying. Sadly I have to report that Arthur passed away in February, so I will not be able to pursue that line of enquiry further although I am happy I had the opportunity to speak with him that one time and that he knew his beloved Ogle was in good hands." 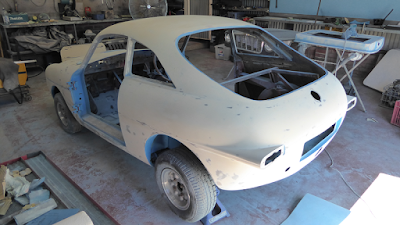