Australia has its fair share of Mini derivatives history, the Min i Jem being one of the cars that were built locally. Enthusiast Duane De Gruchy runs a Facebook page dedicated to Australian cars and asked himself recently what happened to the first of the Jems, registered 'RWW 019', which came to Australia and led to the Taylorspeed variant.
Jim Swan reacted and wrote: "I owned it for a few years. I traded a Cooper 'S' in in Adelaide in 1972 and drove or maybe flew the car back to Darwin. Except for putting a Weber carburetor on it I left it as it was. I had it painted a British racing Green with a lace painted bonnet. As per the photo I entered in the drags which used to be held at WW2 airstrip 33 miles south of Darwin. The car was in a shed in Darwin when cyclone Tracy came in 1974 and it was damaged by a tree but not too badly. Stupidly in 1975 I sold the car for $400 to a guy called Phil Miller and I have not heard of what happened to it. Jokingly I hope, I was told that he buried it so not one else could ever have it. If anyone has a clue as to where it is now please let me know. I only discovered the photo about 9 months ago which was in someone else's album. All my photos were lost in the cyclone." 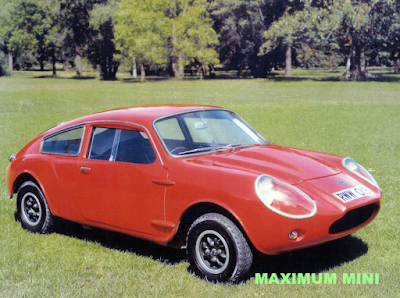 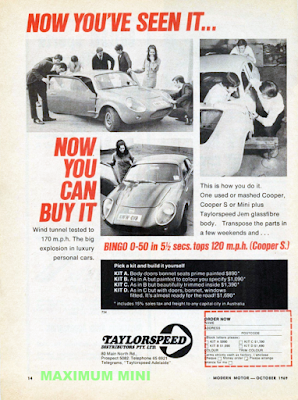 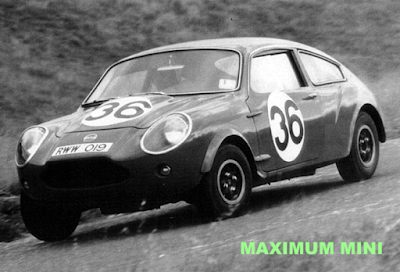 And it was raced, too, by manufacturer John Taylor. Here at Mallala in South Australia
Picture Jeroen Booij archive 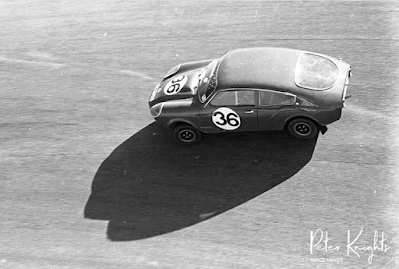 And at Mallala again... a beautiful action shot from which I simply had to share here
Picture Peter Knights 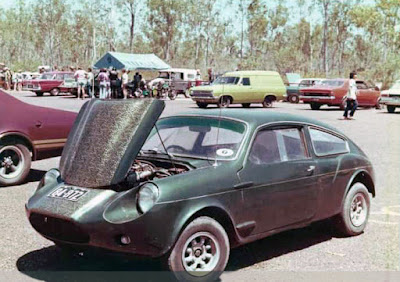 But where is it now? It was last seen when owned by Jim Swan, who sold it in 1975
Rumour has it the car was buried, but that surely must be a joke..?
Picture Jim Swan
Geplaatst door Maximum Mini op 08:30