When you think of coachbuilt Minis the names of Harold Radford and Wood & Pickett spring to mind. But there have been many more companies coachbuilding Minis, in the UK but also in Italy and France. An Australian coachbuilt Mini, however, was new to me. But Leigh Sherringham made me aware of it by sending a copy of a clipping from the Melbourne newspaper 'The Age' dated February 1971.

The article by Christopher de Fraga is about a Mini, locally coachbuilt by a man named Ken Jack of Mossman. And his (Mk2 based?) creation appears to have earned its name as a coachbuilt car, including full-length walnut dashboard with lots of gauges and switches, leather clad seats sourced from the MGB, air conditioning and 'performance improved beyond that of the usual Cooper S' mated to automatic transmission. Further gadgets, hidden in a walnut cabinet in the back, included telephone, refrigerator, dictaphone, glass cabinet and electric razor. The car's rear lights are said to have been changed, too, but unfortunately this cannot be seen on the pictures.

The car is said to have been built for the director of a Sydney company at a cost of over 6,000 dollars and, interestingly, the article states that 'replicas could be made more cheaply from lessons learned in the first exercise'. I wonder if that ever happened. And how about this particular car? A survivor? 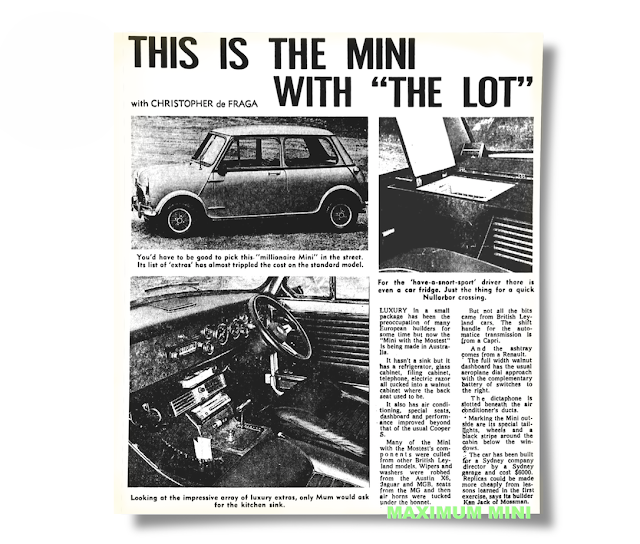 The 'Millionaire Mini' from Sydney, built by Ken Jack. What happened to it?
Picture 'The Age' via Leigh Sherringham
Geplaatst door Maximum Mini op 11:11