Last week, Unipower GT owner Tim Carpenter went to London Concours and took his faithful GT, chassis number 1, with him on invitation. Something of an honour and a recognition of the pedigree of the cars on display, as he told me himself. London Concours is an 'automotive garden party' hosted in the heart of the City of London in the grounds of the Honourable Artillery Company. This year's event featured 92 invited vehicles arranged in themed displays as curated by the chaps of Octane Magazine. Tim was kind enough to send me some pictures and answer a few questions.
Maximum Mini - What did you do to prepare yourself and the car?
Tim Carpenter - I’d not been to a concours event before so I did not really know what to expect. My car gets used on the road a fair bit but I knew it had to be very nicely presented so I got to work on the worst of its road scars and then got polishing. The whole exercise took about three days solid. I don’t think the car has ever been as clean. London Concours has quite a bit of style so I got out my summer glad rags and polished my shoes too! Good job I took my full length raincoat and umbrella. It poured with rain all day on Wednesday.
MM - What were you expecting?
TC - A refined and elegant display of all sorts of cars in a very nice setting. I was not disappointed. The organization and hospitality of the organizers was excellent.
MM - What kind of cars and people did you meet up with?
TC - The cars on display were arranged in themes, for example, Lamborghinis, Convertibles, Sand racers etc. The Unipower GT was in a ‘Lost Marques’ display, which exhibited cars of manufacturers that may have deserved to stay in business but were forced to disappear. I think that most of the visitors were seriously knowledgeable petrol heads. The rest had an eye for style. Everyone was very friendly and complimentary.
MM - What kind of reactions did you get on the Unipower?
TC - universal enthusiasm. Lots of the visitors were very knowledgeable about the cars on display and made interesting and informed comparisons with some of the exotics at the show. I always encourage people to sit in the car at these events to really give them a proper impression of its personality. Smiles all round. They love it!
MM - Were there any people who knew the car or had any specific Unipower related stories to tell you?
TC - A few including a couple of journalists who had written articles about the car in the past.
MM - Oh - and did you win a prize..?
TC – Well, I didn’t actually know I was in a competition until I got there! The Lost Marques award went to a very nice Facel Vega. I guess it’s really difficult to make comparisons between such a car, an AC Ace, an Iso Rivolta Grifo, a Jowett Javelin etc etc. It was just great to be a part of such a fun event. I made lots of new friends. That’s a prize enough for me. 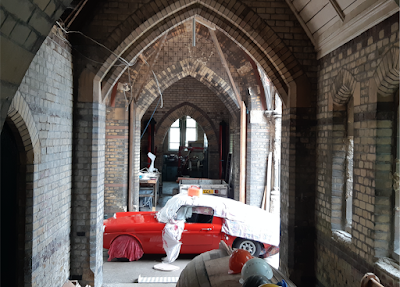 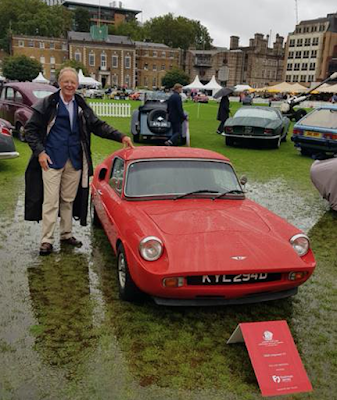 And look how beautifully the water repels from the GT's body!
Picture Chris Davies 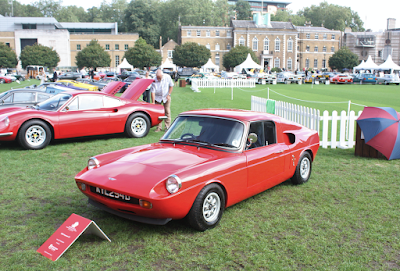 Sun's out again. A line up of no less then 10 Dinos next to Unipower GT number 1
Picture Tim Carpenter 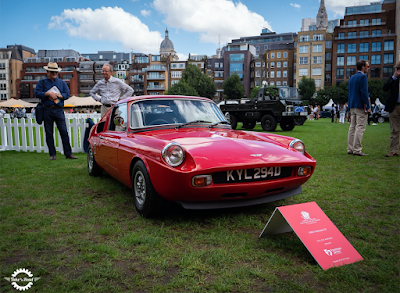 Judging time. 'I didn’t actually know I was in a competition until I got there!', said Tim
Picture Niall Julian - Take to the Road 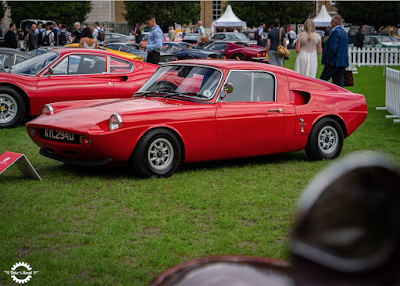 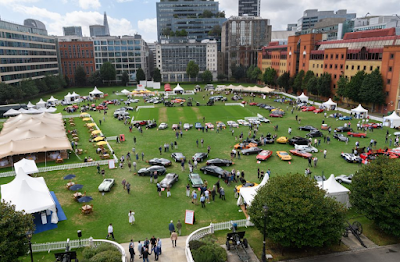