The Landar R7 that disappeared

The Radnall brothers built only four Landar R7s, and so far I tracked down two of these. One of them was sold new in the USA and is still raced regularly there in the hands of Carl Braun. Another spends its days in a Japanese lock up garage in a pretty sad state now. Pity indeed. From what I understand car number three was heavily modified in the USA and (sadly, I think) equiped with a Suzuki motorcycle engine somewhere in the 1980s. The fourth and last car appears to be missing, but I think it could be the one on the picture below. The image was sent to me by former Landar R6 owner Milton Holland (more here), who took it on a hill climbing event but couldn't remember when or where. I think it could be Harewood, where Frank Aston raced a Landar R7 in 1971 - and far from slow, too. He took the baby CanAm racer to 1st in his class during the event and also brought it home 1st in the 'Castrol BARC Top Test Run Off', or so I found on the Harewood Hill history website... Now, where could this baby be today..?

UPDATE 10 April 2013: Not Harewood but Shelsley Walsh! Both Chris Gittins as Alistair Cox are sure. Chris wrote: "It is on a section of track called 'crossing'. Alistair added: "It is indeed Shelsely Walsh. Interestingly, there's a picture on this page of the Dennis Pegg noted on the Harewood program in his Lotus XI driving Pandora / Mistron at exactly the same point in 1974 (see here). Oh, and I know the owner of the 3rd car you mention, the much modified car in the US. Have sent him a link to this." Thanks chaps! 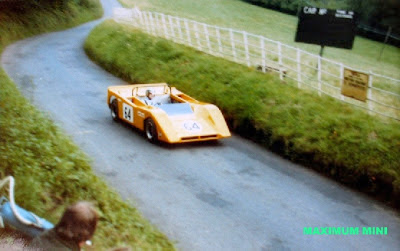 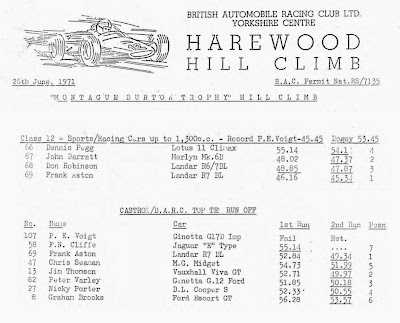 Frank Aston drove the Landar R7 to victory in his class and in the Run Off
Picture courtesy harewoodhillhistory.co.uk