Where is John Lennon's Mini?

Coachbuilt Minis of 1960s celebrities have a strange habit to seemingly disappear. Remember Enzo Ferrari's Mini Cooper, converted by an unknown coachbuilder? Or The Monkees Mike Nesmith's cool Radford? Or how about Mick Jagger's '67 Wood & Pickett? Footballer George Best's white Radford? Comedian Laurence Harvey's W&P? Anyone? Well, and then there's John Lennon's Mini, a black 1965 Austin Cooper 'S' equiped with black bumpers, wheels and pitch dark tinted windows by Harold Radford coachbuilders, too. It was registered LGF 696D not earlier then February 1966. Perhaps because Lennon was on tour in the USA for much of '65? Or because he wasn't a keen driver who only just had his driver's licence?

Anyway: after I wrote about it a few weeks ago (click here) I received a message from an anonymous reader. He wrote: "Hi. I've been into coachbuilt Minis for over 35 years and have followed up stories about this special breed of cars for years. As far as Lennon's Mini goes, when he moved to the USA he gave it to his then-butler, who in turn travelled the UK on his narrow boat and the car was carried around on this. But due to this it didnt last long thanks to rust, and it was scrapped. That's one story I heard. Then about 20 years ago I answered an ad about a half restored Radford Mini for sale in Holmfirth. The guy wanted 4,500 pounds for it. Once I was interested he told me if I gave him the asking price, he had the registration documents and logbook for Lennon's car. After that I never heard from him again." Strangely, the DVLA database says that LGF 696D is still on the road. Now who ever said something about Lennon's death and conspiracy theories..? The pictures below are screen grabs from 1966 footage that can be seen here.
UPDATE 7 April 2021: The car is shortly seen in 1968 film footage made by John and Yoko themselves when it was repainted green/cream. What's more: it was a hatchback! Click here 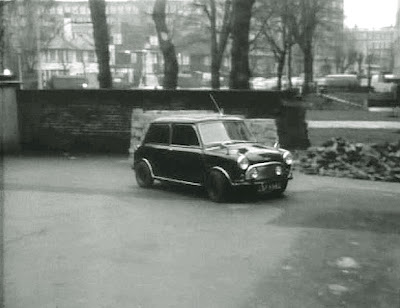 A black Radford Mini arrives in London. Pitch dark windows give no hint to who's inside
Picture courtesy imcdb.com 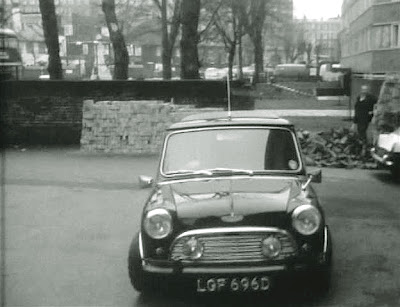 The car, registered in February 1966, is of 1965 vintage - the year Lennon got his driver's licence
Picture courtesy imcdb.com 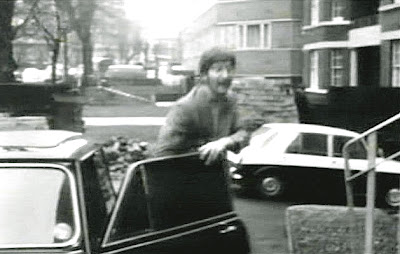 It's him! Lennon steps out of chauffeur driven car. Where is his Radford Mini de Ville now?
Picture courtesy imcdb.com