Michael Nahar of Connecticut, USA got in touch as he'd seen a Mini Coupe. This Mini Coupe. And he wondered if I knew more about it by now as he was offered the car recently. Well, I didn't know more but thought it may well have been an ABS roof conversion and so asked ABS boss Tony Bucknall. Tony came back instantly: "Hi Jeroen, that is one of the conversions done by a company in Norfolk, it's the same moulding, yes. Unfortunately our Coupe roof was taken off the sales list two weeks ago as we took the mould out of the storage container to make one for a customer in Ireland, only to find the mould has been effected by Osmosis and is now useless. So that clubman is even rarer now!"

I asked him if he remembered the name of the Norfolk company, but unfortunately he did not: "I purchased a really strange set of body kit moulds and the roof moulding from a gentleman who had ceased trading several years prior. It was late 90's when I bought them, so it may well have been trading in the 80's. The only images I have seen where that Clubman which was used on a black and white advertising flyer, and a red mini with the body kit fitted, the body kit had a large box shape on the front bumper/grill area, it looked like a cage on the front of the car!" I hope he or somebody else will be able to find that ad one day.

Meanwhile, Michael had a look at the car earlier this week and came back to me, too: "I was let down by the car's detailing, with the fiberglass clearly visible from inside. Under the rear screen, pop rivets are visible through the paint and the same goes for the boot. I believe it will need some work where the fiberglass is mounted on the steel body although the car seems to be sound structurally. The doors close beautifully and the seems are all okay. It's a pity that the rear side windows have just been glued in though. What do you think?" Well, I quite like the car, even alone it was for its rarity. You won't find another in the USA - I'm quite sure of that! 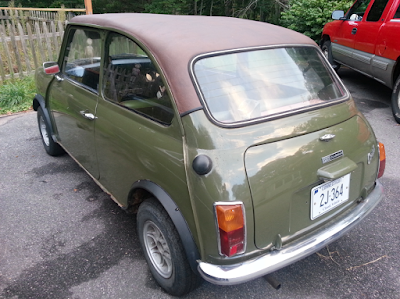 A Mini Coupe, believed to have been created in Norfolk in the 1980s
Picture courtesy Michael Nahar 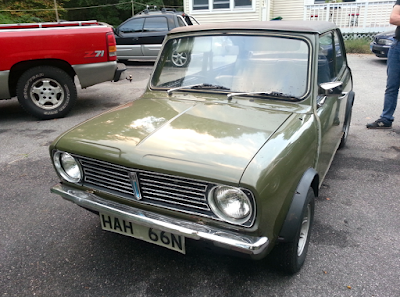 That's a British plate dating back to 1974. But the car ended up in the USA
Picture courtesy Michael Nahar 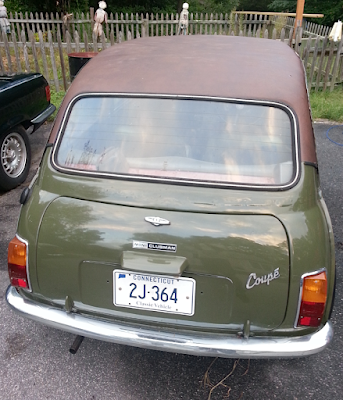 Detailing could be better, but the colour scheme is definitely cool. Is that a Marina logo?
Picture courtesy Michael Nahar