Not a Moke, but where is it?

Reader Tom Aldrian wonders if his mock-Moke is still around. He wrote: "Hi Jeroen, lots of fun reading the books I bought from you, bringing back some distant memories like the Nomad I took to the IMM in Ireland (I wonder if that car is still about and if I could borrow it for another trip to Ireland…). Or turning up at my brothers rather posh wedding in Germany in an MDV (my mom was anything but impressed). Anyway, here a picture of another thing I used to own: I bought it around 1999 somewhere in or around Walsall. It was advertised as a Moke, which it wasn't, and came with no registration. As it was based on a Mini Van floor pan (with quite a few genuine Moke panels thrown at it), I sourced an according log book and had lots of fun with it. It eventually went via Ebay and I last heard anything of it when it turned up on Ebay again probably about 10 years ago, then without registration and some bullshit story about having been a film star used in an ice cream advert. It still had the seats I made from some wooden planks but the engine had been removed, so I don't think it had done much else than sitting in somebodies garden since I sold it. If I find any better pictures, I'll forward them to you." 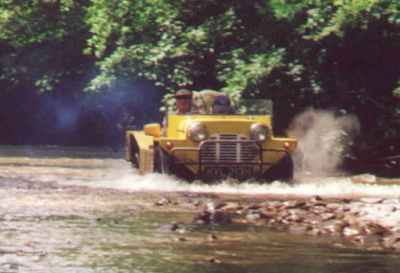 Tom in the Mini Van based Moke replica he used to own from 1999 on. Is it still alive?
Picture courtesy Tom Aldrian

Update 16 June: Could this be the ice cream advert mentioned? Thanks to Bart van Reusel