A copy of this leaflet, which I'd never seen before, was sent to me by Joost van Diën. Yes, that's the 1967 Le Mans Mini Marcos works car with its modified windscreen. It's seen here during its time with South-African racer Peter Kat, who was sponsored by Checkers - a South-African supermarket chain. Kat's first race in the Marcos took place at the Roy Hesketh circuit on Boxing Day, December 26th, in 1967. Checkers certainly seem to have had good faith in him. Kat and his c-driver Dirk Marais came 11th overall.

Last year in July I incidentally caused a bit of a stir when I wrote about this (originally green) car and its (originally yellow) sister car, mixing them up. There was a good excuse though. It turned out that the yellow Mini Marcos had received a signature modification also: its windscreen was modified just like the one on the green car, somewhere between 19 June and 23 July 1967. A comprehensive new article with many pictures followed, which you can still read here. Meanwhile a few more pictures of the car during its Checkers sponsorship have turned up, one of them showing it in its colours (here). Keep them coming! 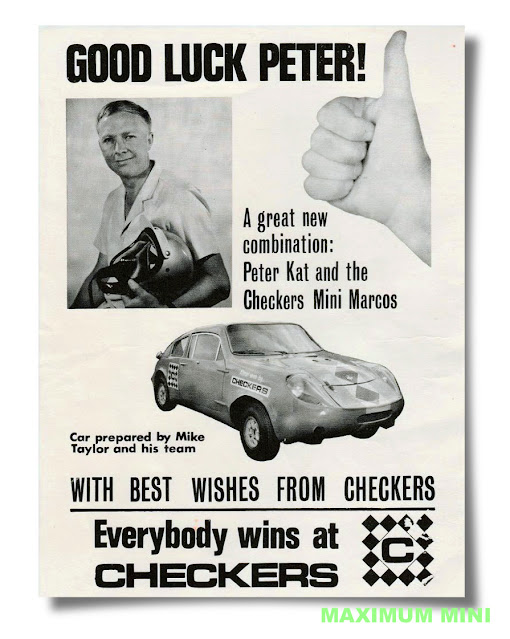