Appologies for being so slow with updates on my blog but things have been hectic around here. I drove a rally for the first time in years (with the plain stupid new Mini Countryman, dreaming of driving a real Mini or better: a derivative) and wrote more stories in two weeks time then I did in the two months predecessing.
Meanwhile news on the Mini derivative front continues to flow in, too.

Latest is an update on the Camber GT that I wrote about in the files before. It's the car known as 'HPN14D' that was described here. It was probably the first Camber GT built and was converted with a Maya GT nose section later in its life and probably converted to targa roof specifications in the seventies or eighties. I was contacted by Daniel Boucher recently who appears to own the car to this day. Daniel wrote: "I was given it by a nice chap in Wimbledon. It was painted blue and had been converted into a convertible. It had a Cooper 1275 engine and Cooper S brakes but when I received it it was a rite heap and I spent about a year restoring it. However, I have had problems with retaining the original number plate as I cannot find the chassis number. The DVLA have not been helpful one bit and wanted to make it a Q registration. But it is on the road using a Mini registration at the moment because I refuse to make it a Q car."
I am not too keen on the conversion but am thrilled to learn that the car survives. Daniel agrees and states that he would prefer to bring the car back to its original condition with a roof. Now that's an idea... 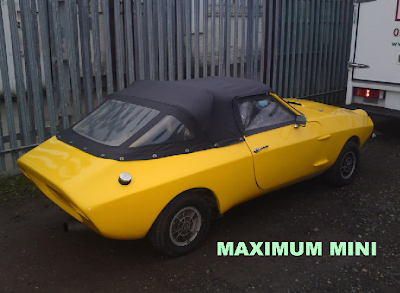 From a closed Camber GT to a Maya GT to a targa to a convertible. Old soldiers never die... 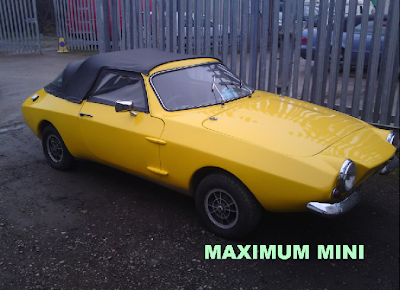 Cabrio conversion seems odd, but at least the car survives. Is it the only Maya front end surviving?