And this is supposedly Mini Jem No.2

After yesterday's very early Mini Jem (click here) I have taken a deep dive into the archives to find out more about the car on the leaflet, but couldn't find anything. What I did find though was a nice article in a 1971 issue of Hot Car magazine, supposedly about the second Mini Jem built. It wrote:

"David Griggiths is 24, and drives a 1967 Mini Jem. It's his seventh car (...) When we say a '67 Jem, what we actually mean is a Mk1 Jem, registered in 1967. David bought the car in the summer of 1970, from the second owner, for £270. It was, apparantly, the second chassis on the road. When he bought it the engine was clapped, it needed two new tyres, wheel bearings, and the wiring loom was unspeakably bad; it wasn't colour coded and when somethings stops, as it frequently does, he has problems, to put it mildly (...) Originally this Jem had an SPQR gear linkage attached to the 850 gearbox. It wasn't up to much though, so when the engine was rebuilt it was replaced by an 1100 enclosed gear linkage (...) Gearchange is now super sleek, and with the low gear ratios of the 850 box the acceleration is such that wheelspin in first, second and third is possible in the wet. Top speed is around the 95mph mark. Performancewise it'll keep up with a Cooper S to about 50, when the S will just begin to show who's boss. (...) David has some very strong feelings on his car. 'I must say this', he said, 'I've never failed to enjoy driving it. It attracts attention, sure, but that's not a half of it. I love kit cars. The age of distinction is slowly dying. Just look around this car park: there's only half a dozen makes around.That's the whole thing about kit cars - however much goes wrong the individuality keeps you interested. Of course, water comes in something wicked on left hand bends, but it's something you either fix or put up with."

Now, after some fiddling with the DVLA website I was much surprised to learn that the car is still in the database, showing it was put on the road in March 1967. That sounds fair as the first Jem bodies were produced in the Summer of 1966 meaning it took a privateer a winter to turn an early body into a car. It was sorn in september 1988 which is over twenty years ago, I know. Something in me says it could still be hidden in a barn though... 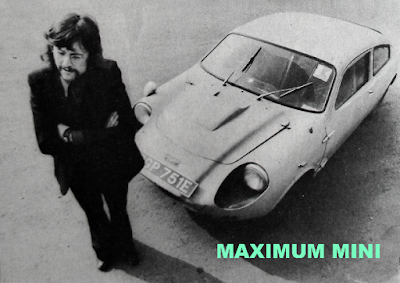