I have had some comments on the fact that some the cars featured on my blog are Mini Moke derivatives rather then Mini derivatives. I know, but just like these cars too, so decided to include them here. As a matter of fact there are some cars that are 1100 based that I find interesting too but was unsure whether to include them or not in book or blog. Paul Wylde replied to that question with an example: the Navajo kit car that was made in the early 1980s in a workshop on the grounds of Goodwood. Paul wrote: "Definitely a rare beast so that's a yes from me. Cars like these have to be put down on paper so they will not be fogot." Tim Neal added: "Yes, include them. They tick all the boxes: Designer, A-series, Longbridge etc... unlike others!"

Anyway: I had some Mystery Mini (or well, 1100) derivatives to start with, so there we go. This one comes from Graeme Farr (the Kiwi with a soft spot for De Joux's, see here) and appears to be 1100 based. Graeme wrote: "This unknown Morris 1100 based car used to live in Wellington – I am fairly sure it was taken to the tip by the local council shorty after the photo was taken – probably in the 1990s. Shame". Question is: who knows more about it?

UPDATE 9 December 2019: The car survives at a wrecker's yard in Horopito and is named Eclipse. See here. 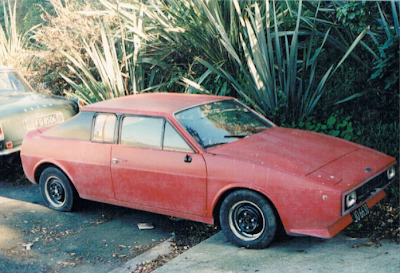 Spotted in Wellington by avid reader of this blog. What is this nice car?