Many efforts have been made to turn the standard Mini into a more streamlined package. Not easy, and if you did not want to spent all your money on a Mini Marcos kit, or whichever derivative kit there was for sale back in the 1960s, the way to go was to fit a stick on fibreglass front end conversion on your car. Several were on offer back then of which the Scorpion Hayley and Ridgway Sports conversions were best known. I even have a few brochures of these which I think are good fun.
Now don't think Mini nose conversions were a typical thing of the 1960s. As a matter of fact, a German company is doing just about the exact same thing right now for the BMW Mini. Look at that! 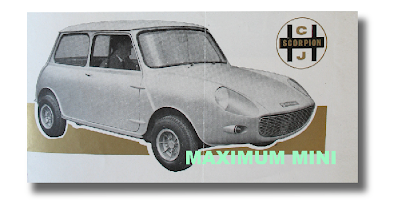 Scorpion Hayley nose conversion has to be best known Mini nose job. According to designer Chris Humberstone 1000s were sold, but I never saw one! Note standard Mini grille turned upside down 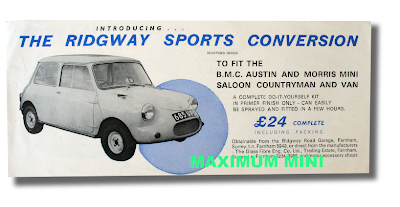 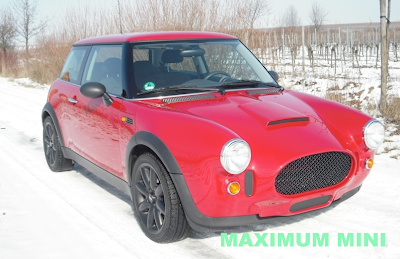 But hang on, how about this one? A modern day nose job for the BMW Mini called the Cobra conversion. It clearly is inspired by the AC Cobra hence its name. At least it makes an everyday Mini individual

I'm not photoshopping this. The Cobra kit really is available, and the original bumpers including airbag deployment are maintained. Prices start at 2100 GBP or 2380 euros unpainted