A Unipower in Catalunya

From what I understand is that originally 3 Unipower GTs made it to Spain. Or perhaps only 2 made it to Spain and 1 to Catalunya, as a film on youtube now proves of the existence of a GT in that autonomous part of Spain. The car in question was driven in the 1973 season by local boy Miquel Brunells who'd previously raced a Mini known as 'The Soap Pill' in and around the local mountains and on the track in Barcelona's long distance races. He became a local champion in 1970 and 1971 and even won a national championship in 1972, leaving much bigger machinery behind. However, for the 1973 season Brunells decided he needed something new. A Unipower GT became his weapon of choice and the car's original 998cc engine is swapped for the 1275 unit of Brunells Mini, supposedly good for 90hp. The GT is entered in four road races in the 1973 season: Montserrat, Castillo Montjuich, Sant Cugat-Tibidabo and Montseny and during three of these events (it wears three different numbers) a camera man managed to shoot some footage of the low slung Mini derivative.

You can see it by clicking on the film below. Never mind the dreary music and feel free to skip the first two minutes or so when Brunell's Mini is depicted. Because the good bit starts at around 2:20 when the Unipower is shown in full Technicolour - like Brunell's Mini light yellow and green. I think it is some fantastic film with the car driven hard on twisty maountain roads (Brunells almost loses it at 3:31). I'd never seen something like it before with a Unipower in it.

After the yellow and green GT Brunells went on to drive a Brabham Formula 2, a Lola racer, rally Fiestas and Group 2 Escorts and even Ducati motorbikes. What happened to the Unipower? That's a mystery, or so it seems. One of the supossed 3 cars imported into Spain has been for sale for quite a while now but it is said not to be the Brunell's car (see it for sale here). Many thanks to Stef Wray for the tip and 'pepsimes' for uploading the video on youtube.
PS: what on earth is the thing at 3:26? A Morris Minor?!

UPDATE 29 July 2019: More pictures of Brunells in action in the Unipower here. 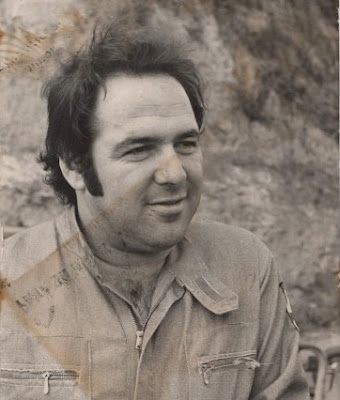 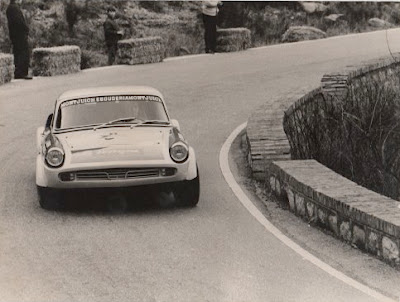 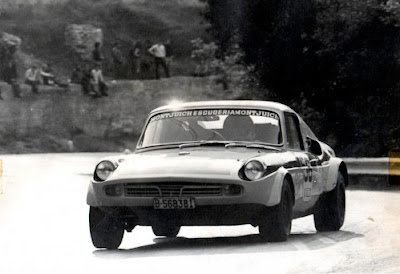 The car was road registered in Barcelona, here at the '73 Sant Cugat-Tibidabo race
Picture courtesy www.racing-files.com