First, a message came in from Carlos Maciel in Portugal. He wrote: "Being a Mini nut (1 Mini Marcos, 1 Van, 2 Minis) I follow your blog with some interest. This brings me to the matter of Unipower updates. Portugal is home of one of the special lightweight versions: RR-28-52. But there is another one, I think its is a normal road version with a Cooper engine and registered RR-28-37. Please find attached two pictures to upadate the 'register'. Unfortunately I do not know the car's chassis number but it came to Portugal at the same time as RR-28-52: around 1968. Thanks for all the information you have been giving us. Regards, Carlos." And thank you, too, Carlos!

Another fantastic chunk of information comes from the United States. I now understand there were 13 GTs imported to the US by an official concessionaire in Rockville, Maryland. That's interesting. Question is how many of these cars remain as several are said to have been exported. Certain is that two cars from Colorado went back to the UK a few years back (now 'NOP 413F' and 'ROR 99G'). Two are said to remain in Rochester, one in New York, one in Minnesota, one in Arizona and one in Virginia. Information is very scarce, but there have to be people here knowing more.

Next, over to Japan, where a treasure trove is about to be opened - hopefully. The location of the orange colored mystery car is finally unearthed, and what a location it is. The car is stored in a two-story warehouse in Gifu that appears to be chuck full with British and Italian exotics. I understand the company housed here used to be Japan's Lotus concessionaire, but ceased trading many years ago. What happened to it afterwards is shrouded in mystery but fact is that the premises are hiding lots and lots of rare cars, including Lotuses, Maseratis, Abarths, Ferraris, many Minis and our mystery Unipower. To be continued. Meanwhile the orange/yellow lhd car in Japan is spotted for sale once more... 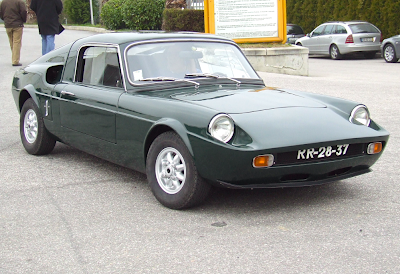 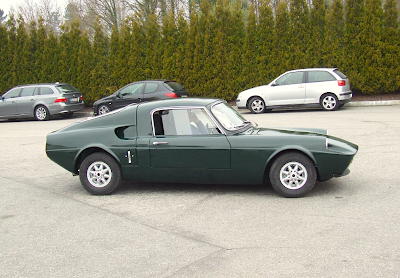 This one is said to be Cooper based, and the other Portugese car being a lightweight
Picture courtesy Carlos Maciel 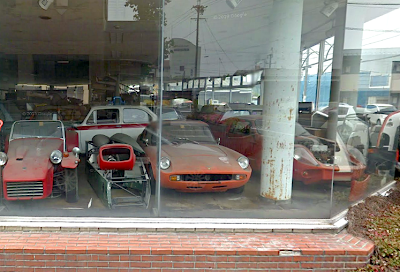 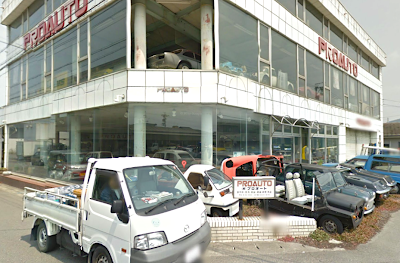 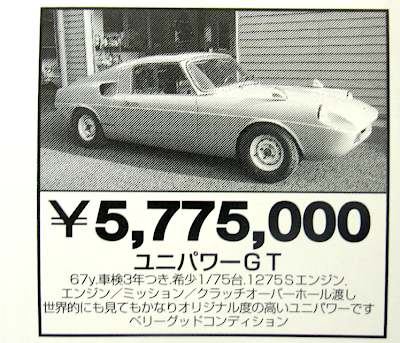 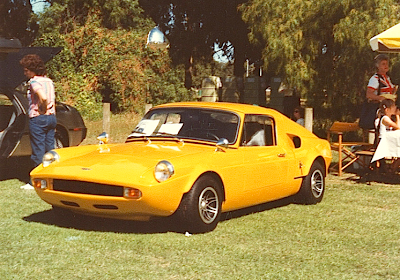 One of 13 Unipower GTs that are said to have been officially imported into the US
Picture courtesy Flickr.com