Paul Edwards dropped a line on the forum to see if anyone out here knows more about the Mini Marcos he once had. He wrote: "I came across this forum while cruising for Mini parts and it made me think about my old Marcos. I was wondering if by chance it's still around or anyone knows of its fate? I bought it in the late 70's as being the car from the 1971 London motor show. It was white and fitted with a tailgate. The registration number was CHY 1K and it was fitted with a 1380cc engine and straight cut gearbox when I got it. For the 20-odd year old boy that I was it was quite the bird puller! Anyway after a fire I got urge for something a little less flammable and went on to the standard Cooper cars. The Mini Marcos was purchased by a Peter? in Merton I think. Did it survive or was it broken up?" Unfortunately I don't know anything about it. It did ring a bell, but all I could find was a picture of the 1969 Motor Show with a Mini Marcos outside. Now if Paul's Marcos really was a former show car someone should know it? 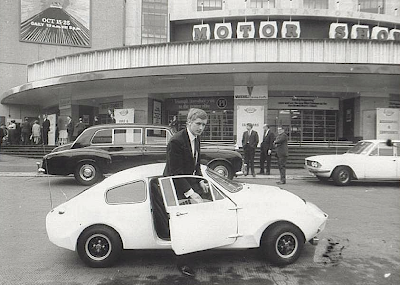 Another white Mini Marcos, not in 1971 but at the 1969 London Motor Show
Picture Jeroen Booij archive