Over the next few days or weeks, I'll update you on the discovery of the Le Mans Mini Marcos. Looking back I can tell you that identifying it as the real deal wasn't the easiest of tasks. I received three sketchy pictures of the shell and had to work from there. Now that I have it, things are much easier. Take the layers of paint, for example. These can best be described with the list of previous owners that my friend and colleague Enguerrand Lecesne made.

I now found out that the car was repainted in a lighter blue with an orange stripe to match Hrubon's later 1967 Le Mans entry (a Renault Gordini powered sports car of his own design). There is photographical evidence of that, too, with the two cars standing next to each other at Hrubon's garage, so it does fit in. I also think that it was not painted orange in 1970 but a light red instead, as this is the colour that comes next after the green. Also: after it was lost in October 1975 it appears to have been painted twice more, both times a shade of red, too.

So in the right order that's:

Now, have a look at these photographs, to make it all fit 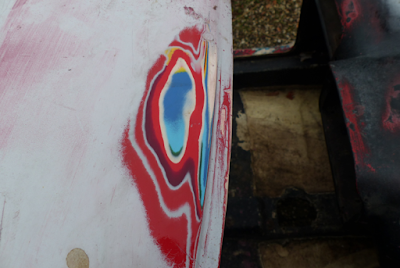 This is the front center of the roof. The French blue and yellow stripe are clearly visible. After that it's light blue, green, red, maroon (with a new slightly darker yellow stripe good visible, too) and two more layers of red
Picture Jeroen Booij 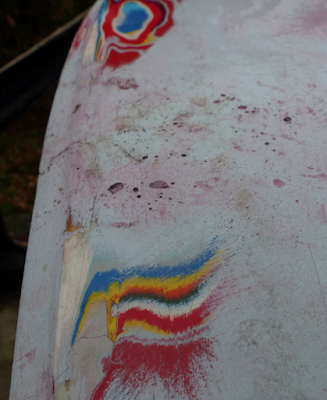 Same spot just above the windscreen, but now from the other side. Here, you can also see the orange that was used for the stripe
Picture Jeroen Booij 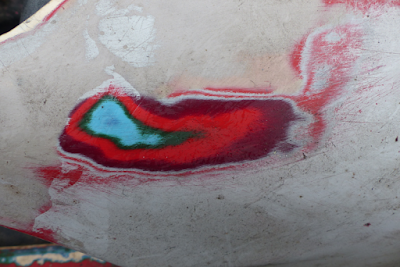 This is the right hand front wing. No yellows are visible here as these were only painted in a broad stripe over the length of the car. French blue is just visible under the light blue paint
Picture Jeroen Booij 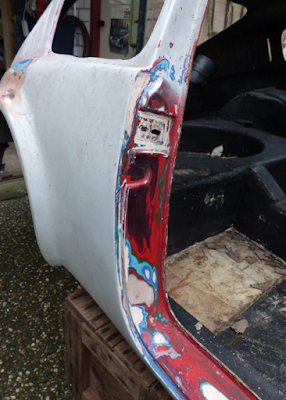 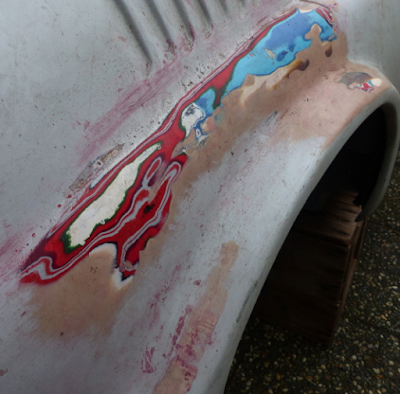 This is the right hand rear wheel arch. What I like is that the white roundel is still hidden here, too
Picture Jeroen Booij 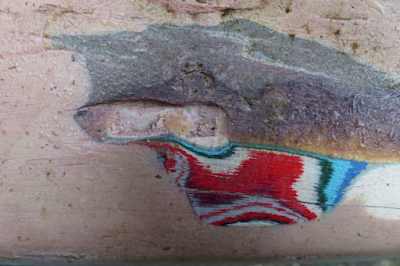 This is even more closed up onto the wheel arch. Unfortunately these have been modified, with the arch smoothed onto the body. The filling material can be clearly seen here
Picture Jeroen Booij

Enguerrand Lecesne writes to me:

1966 French blue was an idea of Jean-Louis Marnat to do Le Mans
1967 light blue (bleu ciel) with orange stripes, in 67, Claude Plisson explains that it was an idea of Hrubon: give a repaint in Gulf lookalike colors (Mirage cars)...
1970 Albertini, the color was certainly Red (Albertini dixit) but it is vermillon, a red with orange (this is what i've called orange to give you a clue).