A message from the horse's mouth, or so to speak. Scamp builder Andrew MacLean, who took over the Jimini project in the 1990s, let me know he was behind the Barbados built CariMoke also, indeed a Jimini made under a licence as mentioned here last week (click!). He wrote:

"The old white Carimoke, no 29, is Mini based, one of about 30 manufactured, under licence from me, by Evolution cars in Barbados, but the others in the photos are Suzuki based! Sadly the new set of moulds I supplied (subcontracted to Fi-glass of Edenbridge) for the Mini based Jimini / Carimoke, developed osmosis as the moisture content leached out by the heat of the Barbadian summer. New moulds were taken off one of my UK supplied bodyshell and altered to accept Suzuki Maruti running gear as can be clearly seen in the photos. Quite a lengthy story deserving much more than the comments in Maximum Mini 2 that I took over Jimini production to kill it off!"

"The Reeves-Law family paid the Scamp Factory a visit in 1995 with a view to buying a Scamp Mk3 manufacturing franchise to take with them to Barbados, at the time I had an early 'Highlander' Jimini as well as Dave Cameron's immaculate metallic blue demonstrator and several freshly produced white GRP body tubs. They liked the slightly more curvaceous Jimini and there and then agreed a deal. I had already made many strengthening improvements to seats and seat belt mountings, with an eye on SVA specifications, spending a fortune. It was assessed by my late friend Dr George Reid from STATUS with praise. The 1990's were busy years with other Scamp manufacturing franchise sold to Jamaica and ....Nigeria. .. I look forward to your visit, it's the 50th birthday of the Scamp this year! It is quite a story. ..I'm responsible for over 400 Mini based kits....so far!"

Thank you Andrew, that does clear up things! 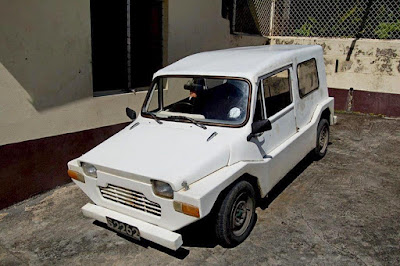 The old white CariMoke no. 29 - one of about 30 made by Evolution Cars of Barbados
Picture via Henk van Brakel 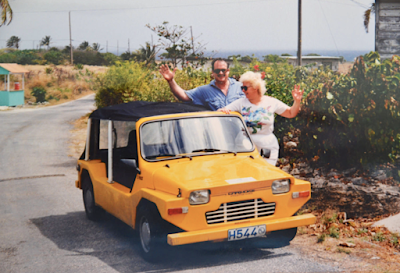 And another. It was a Jimini built under a licence. The initial plan was to build the Scamp
Picture P. Braun / Flickr, via Henk van Brakel 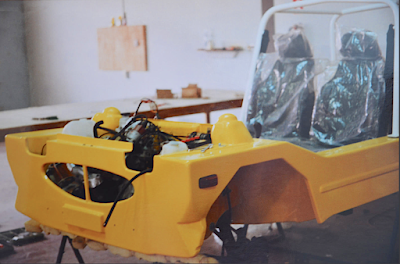 Later CariMokes, however, used Suzuki power and were manufactured from a different mould, too
Picture P. Braun / Flickr, via Henk van Brakel 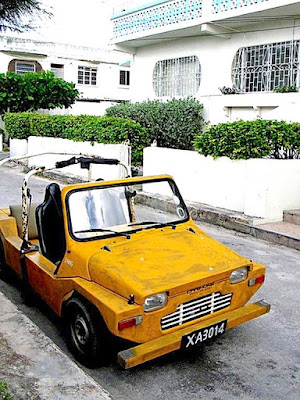