Pete Rigby contacted me about the Paola GT that was unearthed back in 2018 (click here). He wrote: "Lovely to see the car again after all these years as I have a lot of happy memories in that car.

When I had it back in the 1970's it was similar to the the final picture you have but with black stripes up the front and Paola written in script on the nose. The car was pretty faultless I have to say with a very strong 1600 cross flow Ford engine. I don’t know what cam was in it but it ticked over like someone slowly beating a drum! Never ever had an issue with that engine other than the dry sump but that was only a connector that came adrift at Brands Hatch."

"The only issue I had was the gear linkage on 4th gear, which I never got right and I had to hold it in gear on the long straights. I changed ratios so that on circuits 4th was quite long but probably only 120mph flat out. Thruxton was near to my home so I spent quite a bit of time there with the car but it's best outing was Brands Hatch where it came into its own on the Indy circuit."

"I never really had enough money in those days to develop it but we had success with the car. I bought the car from Basil Pitt who I think is still hill climbing today and is really well known on the hills."

"I am surprised it ever ran with a Mini engine, I would have thought the car was way too wide for that but my memory of the car is probably quite hazy. I would love to see the car again as it was my first entry into driving on circuits and as I have said there are a lot of very fond memories and funny stories. As I say I will try and send you those photos I will dig them out and I will ask my friend who use to come with me if they have any." 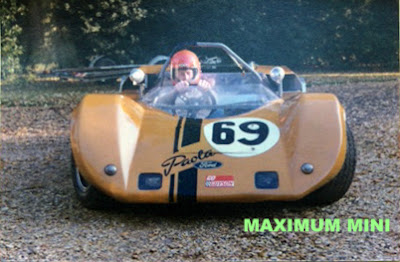 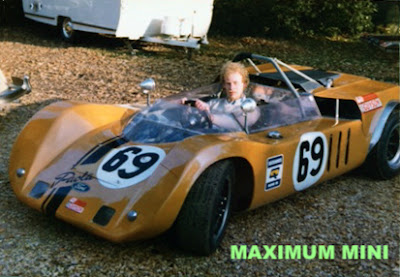 "I'm surprised it ever ran with a Mini engine, I would have thought the car was too wide for that"
Picture Pete Rigby
Geplaatst door Maximum Mini op 09:44