Sludgerunner and the Summer of '76

One of the people I've been corresponding with for years now is Tim Harber, who's owned more Mini derivatives than most of us and some of them were real oddballs - take the Sludgerunner. It's been described in Maximum Mini 3, but here is some more straight from Tim:
"Hi Jeroen, I’ve had other Mini derivatives over the years but none as epic as the car known as the Sludgerunner that I had from about 1976-1990. In the mid-seventies the guys at Club Equipment in Mitcham in Surrey were well into Minis and made some special tools for the car like clutch pullers. They decided to do the Lands’ End to John O’Groats trial and constructed the car - within a week! It had a tubular spaceframe with alloy skin pop-riveted on, with two Mini subframes, with the engine in the back connected to the gearchange by routing it underneath the motor via a rigid rod with the remote housing turned back to front. This lost it valuable ground clearance but it was high in the air as the suspension arms had been lengthened to give about a foot (30cm) of wheel travel with adjustable height cones. This also made the suspension quite soft, which was in turn a blessing as the seats were just square tube frame with alloy skin covering and a thin waterproof cushion offering a small degree of comfort but were surprisingly comfortable. The whole car was made very solidly with strong mudguards so it could get pulled out when it got stuck in a hole. It did the trial successfully but by the time I encountered it in about 1976, it had passed to another owner who took it to Malta. It had been abandoned in the open for a while, so I had to get everything unseized and recommissioned. One of the things I did fit for ease of entry was a Momo quick release steering wheel which was tinged with sadness as I had got it from the workshops of Graham Hill after he died. I was working for Fiat at the time and we were helping out with his F1 team efforts. All the top team members died and I was let loose in the workshops to buy anything I wanted. I also remember having a speedo cable made (which had never worked in its life due to lack of cable) – it was 9 feet long as the gearbox was in the back. For headlights I bought a pair of dipping Oscar headlights from John Brown wheels as I worked round the corner from them at one stage."
"In the hot summer of 1976 when it didn’t rain in most of the UK for months and several reservoirs dried up, my girlfriend and me set off with a borrowed WW2 tent, camping stuff and some tools. I fitted three extra storage boxes and a trunk on the roof. We aimed on going to the Lake District and then to Ben Nevis and beyond in Scotland. However, the rain gods on the West side of Scotland had not been informed of the dry summer. And boy, did it rain. The tent leaked for England so it turned into a bit of an endurance test, especially as I had had a hood made that directed the rain inwards along the top of the windscreen. After several days, we decided to drive to the drier east side of the country and having got through Edinburgh central okay, we headed off. In the countryside east of Edinburgh, the main rear suspension shaft broke, probably as a result of carrying an extra 10kg of water on top of all of our luggage. This dropped the car down in one corner and presented me with a big problem as it was a non-standard part. I was able to phone Club Equipment from a call box a mile away for advice as to what to fix (no mobile phone or breakdown service available). We camped the night by the side of the road and I got a bus into Edinburgh the next day to get a suitable bolt - not quite the right spec but it did the job and we got running again. We saw some epic sights in the North East of England which made up for it a bit, but we never attempted a long trip again. I kept it for quite a while until in about 1987 a customer friend asked if I wanted to sell it. I didn’t but I agreed to lend it to him. He fitted a 1380 motor and painted it red and fitted Weller wheels so it remained fairly funky but in a more 80’s mode. By the late 1980’s I had four children and had moved to the countryside in Gloucestershire and hadn’t used it for quite a while so I let it go to a customer called Julian who I knew as he had opened up a Mini spares shop in Surrey and it quietly moved out of my life. Something tells me it must be lurking somewhere!" 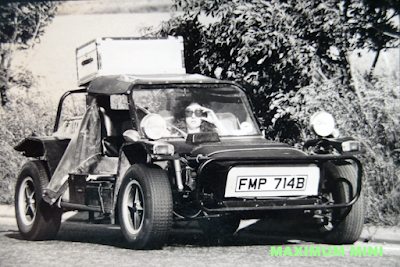 Summer of '76 - sun still shining here as in most of the UK. But not where Tim and his girl went to...
Picture Tim Harber 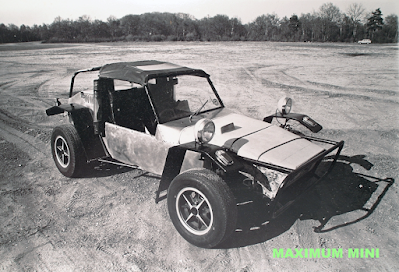 Sludgerunner had been built in a week by Club Equipment in Mitcham, Surrey. It had done Land's End-John O'Groats and a trip to Malta before Tim took it over
Picture Tim Harber 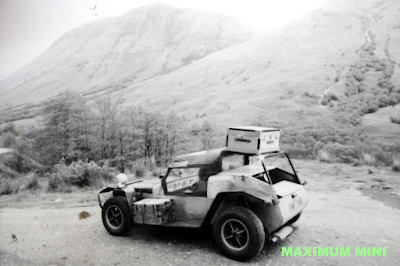 "We set off with a borrowed WW2 tent, camping stuff and some tools. I fitted three extra storage boxes and a trunk on the roof"
Picture Tim Harber 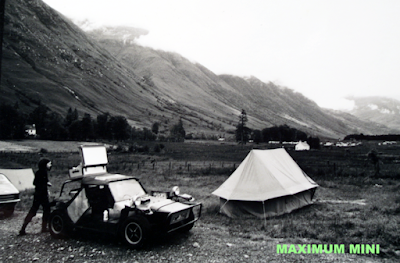 "Boy, did it rain. The tent leaked so it turned into a bit of an endurance test..."
Picture Tim Harber

Never afraid to own daring vehicles, Tim also had a half-share in a TVR Griffith at the same time
Picture Tim Harber 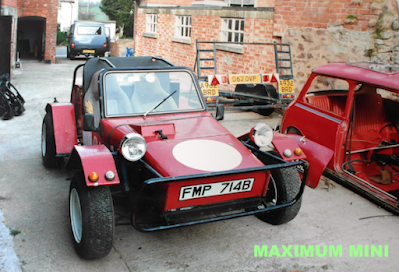 By the late 80’s a man named Julian who ran a Mini parts shop in Surrey took over Sludgerunner. Where is 'FMP 714B' now?
Picture Tim Harber
Geplaatst door Maximum Mini op 11:27