Oh! I wish I found this one myself! 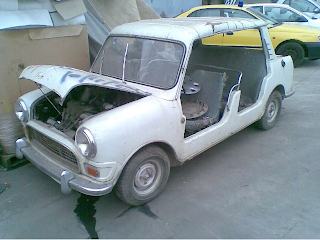 The Mini based Beach Car is a rare sight these days. I know of very few that survive in the world, one in sunny California, one in Canada, another in Monte Carlo and one in the UK. But these are all cars based on the ordinary Mini saloon.
However, at least one Wolseley Hornet or Riley Elf was converted into a Beach Car too.
Like the others, it was styled by BMC's Dick Burzi and got its approval by Alec Issigonis - that's him on the picture in the car. 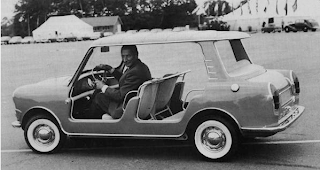 The Beach Car went into limited production in Longbridge and according to Peter Filby less then 20 were made in total. Nick Rogers, who is a bit of an expert on these rare little beasts believes there may have been even less then that. But however many there were, an extremely rare Hornet/Elf based one has just resurfaced in Greece. Could it be the same car that Issigonis was photographed in?
Geplaatst door Maximum Mini op 10:13