The more obscure cars are; the more I tend to like them. Well, not all, but for Mini derivatives that certainly goes. And the Australian Bulanti Mini definitely fits the bill.
The car was dreamt up by Brian Rawlings who had previously worked for other cottage car manufacturers Down Under but came up with his own Mini based sporty in 1971. The aluminium bodied prototype was featured in my book (as photographed by Craig Watson of Autofan fame), and can also be seen in this youtube movie.
However the production cars that followed came with a fibreglass body. 'Production' may be a bit of an exaggeration though, as manufacture was limited to only two more Bulantis! I particularly like Rawlings reasons for that as he was quoted: "It was just too much trouble. All the fiddly things like getting the noise down, doing the electrics and upholstery and one bloke wanting ashtrays in it, get you down." That's character.

But strangely I have never seen current pictures of the other two cars. One of these was being registered 'BAL 551' on New South Wales plates and featured in a couple of Australian magazines of the day. I spent a small fortune on Sports Car World magazines (it's particularly the postage to Europe that makes it hefty) but couldn't find any information on the third car. Who knows if these crazy little Aussies survive? 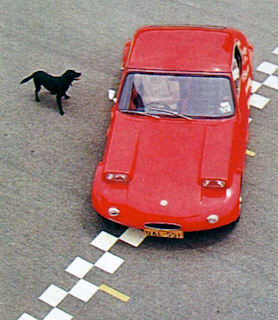 Email ThisBlogThis!Share to TwitterShare to FacebookShare to Pinterest
Labels: Bulanti