Quite a few of the cars that were on my priority list when I started searching for Mini derivatives have been found by now. Some haven’t and one that keeps on haunting me is the ‘Saga’. I was beginning to wonder if the car survives at all, when I received a message about it this weekend.


Stefan Sellin from the very North of Germany writes: “What made me to write you is the Mini Saga in the chapter ‘The cars that didn’t make it’ on page 122 of your book. When I was in the UK in the mid-nineties I paid a visit to a company that had a lot of nice cars there, like a few Radfords, a Mc.Queen Woody and... the lost Saga that was offered to me for 1000 pounds. Unfortunately I did not know about the rarity of the car and did not buy it as it missed one rear light (!!!). Please find enclosed a picture of the car made on the day when I was there. I think the car was sold to Japan or Hong-Kong.” 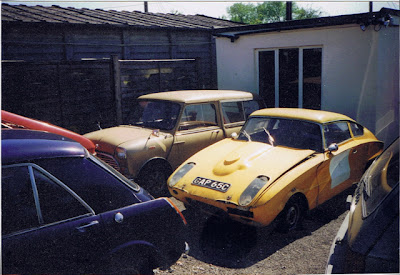 The Saga as seen for the last time, just before being sold
Picture Stefan Sellin
I am not so sure the Saga ever made it to Japan or Hong Kong but at least Stefans message now points out it was sold more then once in the 1990’s. The car was built back in 1966 and the story of its birth is both quirky as funny as I have learnt by now from its designer and builder who spends his days in France now. He lost track of the car after he’d sold it in the late sixties, but would love to know if it survives too. He sent me a stack of wonderful pictures of the car from the time of his ownership. Great stuff.

I did track down the subsequent owner too who had it until 1993, but unfortunately he, too, doesn’t know more of its whereabouts after he sold it. He only recalls it went to a man in the Northampton area who intended to restore it to its former glory. Sadly, the trial ends there. Now that it does seem it has been sold at least once more, it may throw a new light on this never ending saga. Stay tuned. Or better: drop me a line when you know where the Saga could be.