Things seem to have calmed down a bit on the Beach Car that resufaced only earlier this month in Greece. After some worrying moments just after its find the car now made it - in one piece - to its new home where a thorough restoration has just been started.

Meanwhile I found out a bit more about its history. And it seems a very special history too. While the known Beach Cars were built between late 1961 and early 1963 this car's chassis number directs to at least a year earlier. Given the fact that it is based on a Riley Elf/Wolseley Hornet that makes it peculiar, as the booted Minis weren’t launched until October 1961. This one comes with a mid-1960 chassis number which has to make it an Elf or Hornet prototype that was later converted. There are some details that lead to this too, like the unusual rear lights. But the chassis number starting with 'SPL' (a prefix that was given to all prototype vehicles in Longbridge) is the clearest indication. That would make this car a prototype based on a prototype!

Still then it remains unsure whether this was the only Beach Car with a boot. Fact is that this or a similar car was used to ferry journalists around the test track at the pre-launch introduction of the Mini Cooper in July 1961 at the Vehicle Testing Ground in Chobham. This is also where some pictures of Alec Issigonis in it where made. It certainly seems plausible that it was this car, but there is no evidence yet. Issigonis' Greek background seems to have nothing to do with the fact that it ended up in Greece, as this Beach Car just happened to have been sold to a wealthy Greek who unfortunately remains unknown thus far.

According to the new owner the car's body is in a surprisingly good condition. He says the most difficult part will be to find a match for the carpets and to reupholster the pastel blue wicker seats. But by now we found out that these were made by a company named Lloyd Loom who are still in business. He's been in touch with them, so hopefully they will be able to help restoring this little gem. 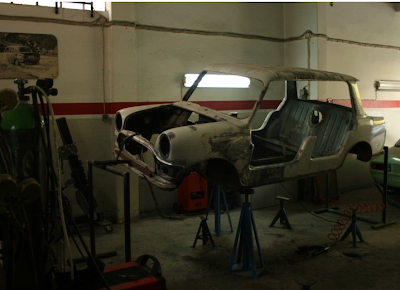 Email ThisBlogThis!Share to TwitterShare to FacebookShare to Pinterest
Labels: Beach cars, Find of the Year, Greece