When you have my book you will have read the story of the Nimbus special that was built up with a Mini Cooper engine from a prototype sports car by a man named Don Parker in 1965. When writing it I remember well having had some troubles in finding out about the car's chequered history. In fact the Don Parker special was one of the few cars of which I wasn't all too sure about its story. And when researching it, all the information that I could lay my hands on came from people who were not directly involved with the thing. But then the book had to be finished and I had to rely on something. Anyhow, it is with some shame that I received an email message last week, putting some of it right. The message came from Mike Hentall, and I did mention him in the book as Parker's son in law and later owner of the car who'd moved to Portugal in the 1980s taking the car with him.

Mike wrote: "I am Don Parker's brother in law (not son in law) and helped in its construction, and competed with it for 5 years, so am in the best position to put the matter straight. The Nimbus started life in South Africa as a special with a Riley engine in the 50s built by my brother in law, Don Parker, and came to UK in 1957 just as a rolling chassis when he returned here to live. The most important point to note here is that you have ascribed Nimbus to the wrong Don Parker!! The one you write of, and picture in your book, was (he died some years ago) a Battersea garage owner who was the 500cc (Formula III) champion in the 1950s, and a very fine driver. This Don Parker who built Nimbus was a man of private means whose great hobby was building specials and racing them entirely as an amateur (he had the money to do so). He is a genius with his hands, having been in his time a fine sculptor, painter, stonemason, welder and panelbeater. He is still alive at 92 and must be one of the few WW2 tail gunners left to tell the tale today."

"Nimbus did start her career in UK as an 1172 Ford Special driven through a Norton gearbox and chain to a solid rear axle. To say it was a handful is the understatement of the year! The body as you show it is, as you say, the same body as was sold as the GSM Dart built by Willi Meissner and Bob van Nierkek in Kent assisted by me and (to a much greater extent) by Donald. He bought (or was given for his help) the first, not quite successful, pull from the mould and that went on the 1172 special which was such a murderous handler. It was about 1965 that Don completely rebuilt it with the Mini Cooper engine in the back mated to a Shorrocks blower which he ran until 1979 when it was passed to me. I ran it in 1980s events but the blower kept shedding rotor blades and in 1981 I changed it for a truck supercharger with a vastly increased capacity. We were running her on a 10.5:1 comp. ratio and blowing at 12lbs. per sq.in. In this form she was producing about 155 bhp and weighed 450 kgs. Even running on pure methanol we were going through pistons every other meeting,but when we could hold her together we collected our share of awards at Prescott and Shelsley in the 'Golden Oldies' Class. I had to give up competition in 1985 and when I moved to Portugal in 1988 I took her with me, meaning to give her a much needed rebuild, but I never got round to it and she was sent back to UK to be sold in about 2002, After that I do not know what happened to her. I wish I had her now!"
Well well. Although merciful about the error, that does fill in the gaps properly. Thank you very much Mike, and my appologies once again for the mistakes. 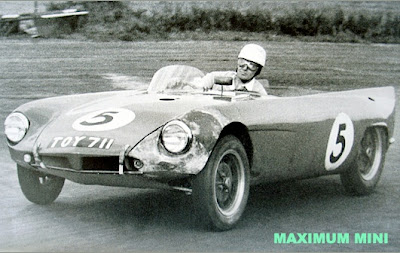 The Don Parker Nimbus special in its original configuration 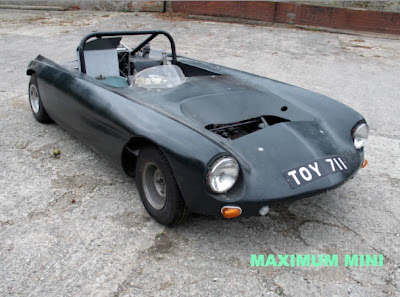 And the car in 'as found' condition, discovered by your's truly 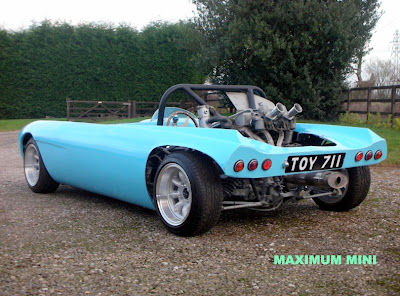 Some years later it was light blue and came with wide wheels... 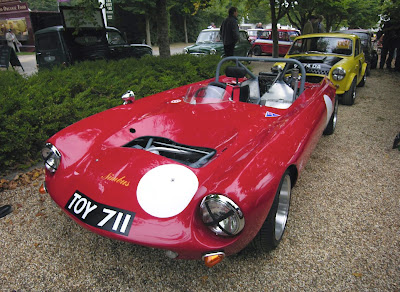