Interesting cars keep on coming up lately. How about this one: an ultra rare Radford Mini Traveller? A couple of weeks ago I received a message from classic car dealer extraordinaire Adrian Hamilton, who wrote: "Dear Jeroen, I am sorry to bother you and I write at the suggestion of Mick Walsh at Classic and Sports Car Magazine here in the UK to ask if you could possibly help me in researching the history of a very rare Mini Countryman that I have recently bought. I just wondered if anybody has any Harold Radford records as to when it was built and to whom it was supplied to when new?" Attached with the message were pictures of a left hand drive car, registered in France since 2001 on Paris plates with date of build shown as 1/1/1967.

I decided to phone my friend Ray Innes who'd been working with Radford's in the 1960s to see if he remembered it. Ray told me he does remember they did some Countrymans/Travellers but unfortunately couldn't tell more then that. He mentioned that Radford's opened in branche in Luton, probably in 1965, where he was transfered to as his daily commute from Cambridgeshire to London didn't amuse him all too much. I then spoke to Naoki Ishizuka, who owns a similar car in Japan but couldn't tell more. And the same went for Nick Rogers, who restored Naoki's car. And French Mini authority Enguerand Lecesne either didn't know it... I nearly gave up.

But then I thought my last chance could be Steve Burkinshaw who has had several Radfords. Steve was the man I should have rung right from the beginning. He said he probably knew the car, thinking it has been in France most of its life. He believes it was light grey previously and was then registered '137 PW 39'. That last number indicates it was in the Jura departement in East France. According to Steve it was registered in the name 'Bonnet'. Steve also confirmed there are no records for the Radford Minis known, but said that, together with this car, he knows of 5 Radford Mini Travellers, and believes there may have been some 10 in total.

Still, that doesn't really crack this car's origins, undoubtly interesting. I am sure somebody else will be able to tell more about it though. Or to speak in Adrian Hamilton's words: "As to its history – there may well lye an interesting story deep down… only time will tell..!" 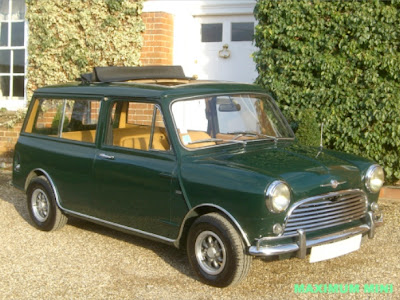 Radford Mini Traveller is rare. This lhd one must have been built in 1966
Picture courtesy Adrian Hamilton 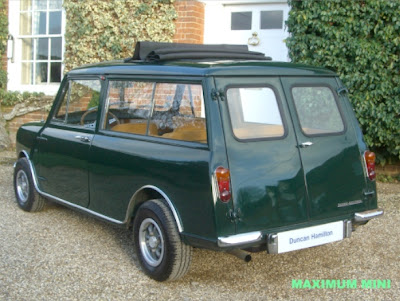 It is registered in France, but unfortunately not much of its history is known
Picture courtesy Adrian Hamilton 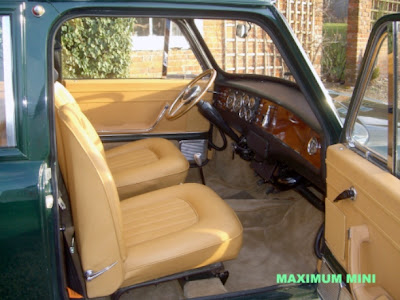 For a Traveller the interior is rather splendid. Bespoke seats and dash; leather, wool, wood
Picture courtesy Adrian Hamilton 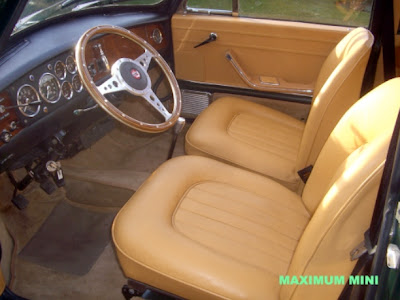 Who recognises these arm rests, unique to this Radford? Are they Jaguar perhaps?
Picture courtesy Adrian Hamilton 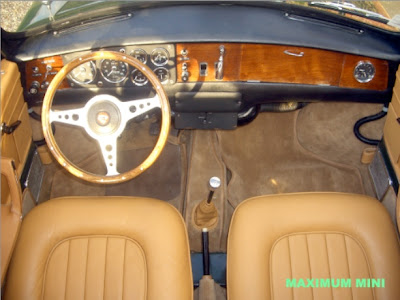