Avid readers of this blog may remember this post (click) about a mystery Maya GT that was last seen in a field in Ashford, Kent in 2007. Back then it was offered for sale for 500 pounds to Simon Coleman who found that just a bit too much for what it was. Question was if it did get sold in the end or got scrapped perhaps, Simon couldn't tell. Fact was that it disappeared from the field shortly after he photographed it with no further information known whatsoever.

Well, the good news is that the car is still alive in Ashford. It was offered once again, this time to Josh Willis who lives in that same place and who wrote: "A chap from just 'round the corner came into the workshop today and said he's got a Mini Maya in his garage he wants to sell, and was I interested? Obviously I thought he meant a Mayfair but he swears he doesn't. He reckons it's some mini based creation like a Midas, Marcos et cetera. I'd never heard of it."

Unfortunately the GT hasn't become any better in the 5 years that have passed as it only seems to have been moved from the open field to another corner in another field. The rear screen (hinged at the top or so it seems) is still cracked, the screens are left open. As noted before it appears to have been red in colour before, but at least now that I know its registration - PAP 14F - I can tell this is not one of the other 9 Cambers/Mayas described on these pages (see Camber/Maya Files here). Josh is eager to buy the car now - if the price is right. If he doesn't someone else around here may be interested to do so? 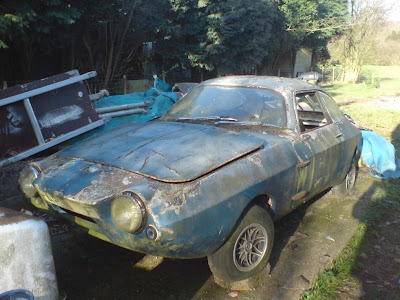 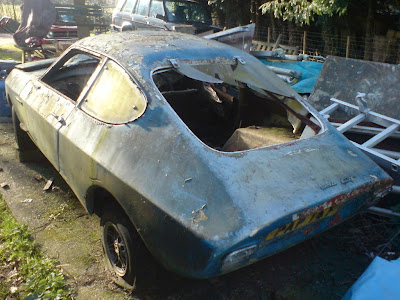