There aren't too many cars related to comic strips. Okay, there's the well worn Batmobile and perhaps Scooby Doo's Mystery Machine, but that's all I can think of. Hang on, anyone out there who remembers The Perishers? A British comic strip appearing in the Daily Mirror from 1959 to 2005? Well, I just found that its creator Maurice Dodd, used to drive a... Siva Buggy! The car is said to have been Cooper 'S' powered and was decorated with the characters of the comic strip: Marlon, Wellington, Maisie, Baby Grumpling and Boot the dog. According to the 1975 magazine article that I found mister Dodd "finds that the strip has a habit of taking over his life, leading to the acquisition of a Boot-type dog which bites visitors and a buggy which features front and rear rollbars. The buggy may be a spin-off from the Perishers, but the rollbars and belts come from Mr. Dodds involvement as an advertisement copywriter on the government's 'Clunk click' campaign (clunk click here)." A groovy machine, isn't it? And, yes, I too wonder what happened to the car. 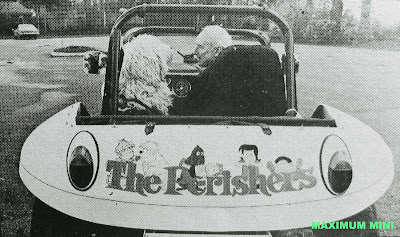 PS: Like a Perishers buggy of your own? Then build a Siva Buggy just like Maurice Dodd's. Take a look at the marketplace section of this blog where there's a project car for sale now. Pretty rare with 94 kits sold. Click on the 'Maximum Mini Market' sign on the right hand side, or simply here
Geplaatst door Maximum Mini op 08:13