The 20th Mystyery Mini derivative to appear on these pages comes from France. Its picture was posted a couple of days back at www.auto-forum.com (click here) with very little information. It was snapped at the Course de côte de Saint-Antonin - that's the Saint-Antonin hill climb - probably in 1972 or 1973. And that's about it. Although it is not even confirmed to be Mini powered, the wheels certainly look like 10 inchers and the photographer does remember it having a Mini mill. Fair enough. The engine is clearly placed at the rear with the radiator probably under its nose (I think that's a radiator cap there). French Mini historian Enguerrand Lecesne adds that the body could have been made by a little firm named SIB, but isn't sure. Apart from IGOL sponsoring (a French lubrificants manufacturer) there is a 'Triplex' sign on the nose section. Could that be this barquette's make? Laissez-moi savoir! 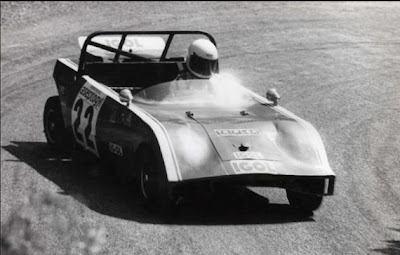 Barquette, snapped at Saint-Antonin in the early 1970s, is said to be Mini based
Hat tip to Enguerreand Lecesne