GTM lives on as the Hambly Coupe

It's been 50 years since the GTM came to life as Bernard Cox' original Grand Touring Mini at the 1967 Racing Car Show and so, last week, celebrations were held at Blyton Park (story here) as well as at the National Kit Car Show at Stoneleigh. Meanwhile, in the main hall at Stoneleigh, the GTM was given a new lease of life as it made its official debut as the Hambly Coupe. I bumped into Derek Hably's first attempt to revive the car back in 2016 (the yellow one below), but that was Ford powered. A year later Derek has decided to launch the car with Mini power after all, mainly due to the big wheels of a Ford donor, which simply don't fit properly, needing serious mods to the base.

Derek is a great GTM enthusiast, who bought his first GTM in the mid seventies, and raced it for decades. In fact he still has his old racing Heerey. He also told me the yellow car was only the first attempt he made at fiberglassing a body, and the orange Mini powered one, the second. It looked pretty good to me and with a Mini engine at the back it deserves a place here. Derek does realize that Mini donors aren't particularly cheap anymore, but he does point out that the number of second hand parts and the amount part suppliers is massive. There's no denying there. Derek also told me he has enough new old stock parts to make five more chassis', so at least five more brand new Coupes can be made. Derek is confident he will pass the IVA test with the car although it still needs some work. The conventional headlights, for that reason, are replaced by the small LEDs, but he isn't too happy with the look and thinks he found a way to use the original Mini lights now. You can read more on his website here, but I hope to keep you posted on Derek's project, too. 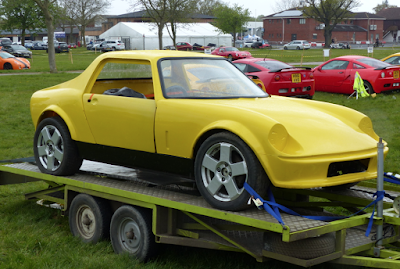 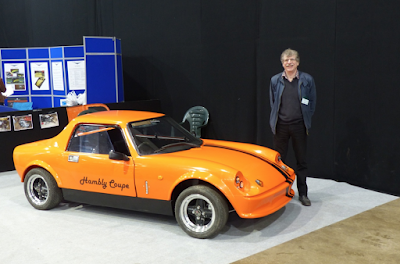 And so… it was back to Mini power once more! Derek is a trained engineer and has confidence
that his Hambly Coupe will pass the IVA test
Picture Jeroen Booij 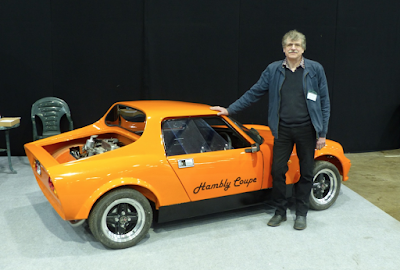 He now owns the moulds and the production rights. This is only the second body he made
Picture Jeroen Booij 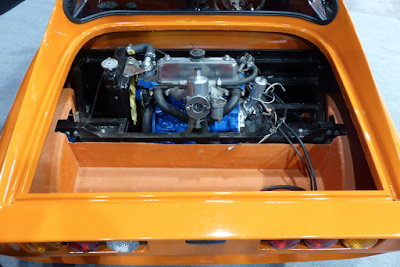 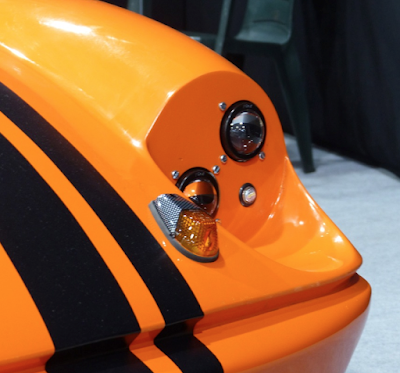 IVA regulations led to these headlights, but Derek thinks he will eventually be able to fit Mini lights
Picture Jeroen Booij 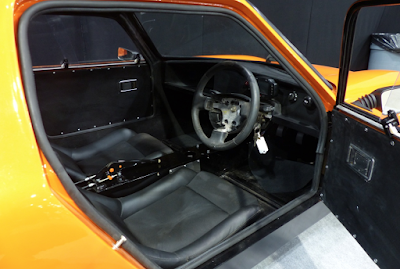 Interior looked neat, too. All was built up by Derek in a record time to get it to Stoneleigh
Picture Jeroen Booij