While I am still hoarding parts for my Mini Marcos project car, in the south of France Philippe Quiriere has started building the car's engine. You may remember that I wrote about the crank he'd found as it being something quite special. It's an AEG 480 that was bought new by tuner Jim Whitehouse direct from BMC’s Special Tuning department in 1966. Whitehouse was the man who set up Arden Engineering and developed the 8-port head, of which he sold the patent in '67 to... BMC.

Anyway: he never used the crank and sold it in 1968 to Jose Albertini, who owned the Le Mans Mini Marcos in 1970. Albertini also never used it, but that is going to change now. Philippe (who took it over from Albertini a year or two ago) is now using it for my engine. He wrote earlier this week: "Hi Jeroen. I just received the crank and it is now almost finished. It is also the most expensive Mini crank (for me)! But a nice part for your project. I give it now for the oil passage." Meanwhile, he added a little movie of it being machined. Love it. 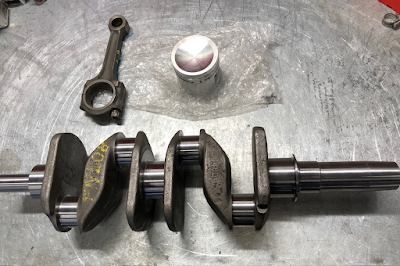 Here you can see it being machined in France, earlier this week
Video courtesy Philippe Quiriere