"Hi Jeroen. I found these pictures of an autotest car named Jola, made in late 1970s and running a Mini 1430cc engine in rear on fiddle brakes so a handbrake for each of the rear wheels to do a handbrake turn. It got stripped in 1999/2000 and all the suspension and subframes plus engine went into an ABS Freestyle as you have in one of your books. It shows it losing a wheel at the Royal Dublin show ground in 1998 on a international event."

"And I got another car for you. Peter and Chris Grimes from Southern Ireland made this Mini Special from a cut down Mini from the late 1970s. Front subframe bulkhead and floor to just behind the seat were retained and then the rear end with a made up rear beam bringing it to the same wheel base as a Mini but with no overhang. In the photo from around 1998 at Birmingham, it was running a 1380cc Cooper 'S'. A very very light car with great vision all round. It won around 8 Northern Ireland autotest test championships and 5 British RAC/MSA championships plus 3 BTRDA championships.
It is still going today but now runs a Vauxhall Nova engine in a mini subframe on 14inch wheels." 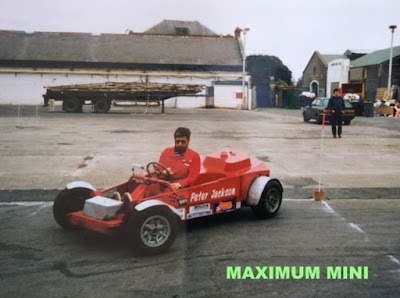 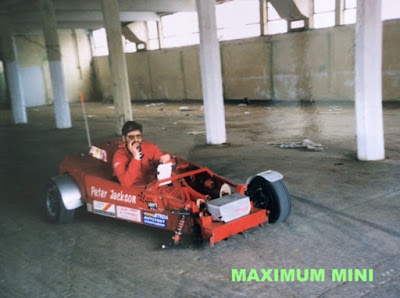 Hmm... Royal Dublin show ground 1998 - when it lost a front wheel in the heat of the moment
Picture Alastair Moffatt 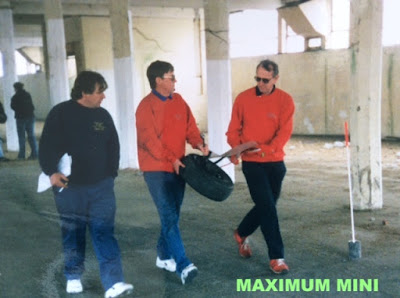 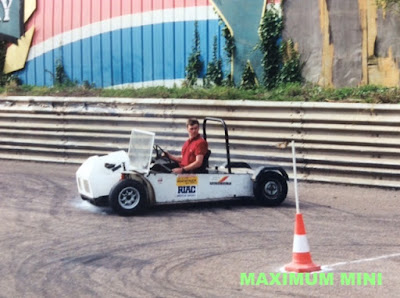 And another Mini based Autotest Special - the Grimes Special, which does survive
Picture Alastair Moffatt