This Mini coupe could have been made for Mad Max. In fact, it was spotted by Andrew Griffiths, who wrote: "Sorry I have no details. It's a sort of evil brother to the DART, haha!" Its body is seriously lowered, deseamed and comes with raked screens, air ducts everywhere, deep-dish wheels and a much-modified nose, not to mention the supercharger sticking out of its bonnet!

So what is it? The number plate looked from New Zealand to me, so I contacted my NZ friend Graeme Farr to see if he knew it, and this is what he came up with: "I have never seen or heard of that car before a few weeks back when I saw that photo. I think it was taken in Auckland. Someone commented that they used to walk past it when they were a kid. It is really ugly! The blower looks like a Roots type one - maybe off a Commer two stroke diesel truck. They were used here mostly as concrete trucks - had lots of torque for getting up hills. Cheers, Graeme."
Now. Who knows more about this intriguing creature from New Zealand?
UPDATE 14 April 2021: A comment from Robert Robinson: "One of my mates had one of those in the early 1970s. Known as a Chevron Vampire V6 (which they weren't), basically a chopped Mini with some custom panels front and rear. There weren't many around. They were a little light on the steering at speed and my mate took his flying off a corner on the Scenic Drive in Waitakere. He extracted it and re-built it too." 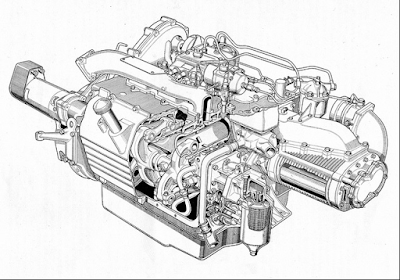 It appears to have a big (Wade?) supercharger sticking out from the bonnet
Picture via Graeme Farr