This car fits in perfectly in the series of DIY Mini Coupes from exotic origins: a fastback Mini from Ecuador, built from a Mini Pick-up and said to be photographed in 1970. Unfortunately that's also just about all we know. The picture, posted by Richard Baltus, is not clear enough to make out the driver's name. Guayaquil is a city in Ecuador - can we assume that it originated from there?

There are not too many racing tracks in Ecuador, or so I understand and best known is Potrero de los Funes but that didn't open before 1987. There is also the Autodromo Yahuarcocha, which opened in 1970 so that could be it. However, there must have been various road races also and this shot looks as if it may very well have been taken on one. Who knows..? 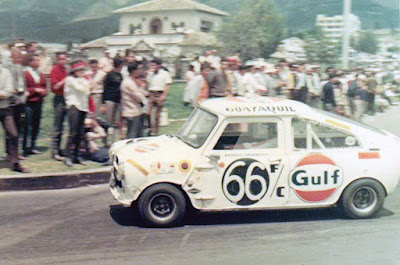 Ecuadorian Mini Coupe seen at around 1970 and supposedly based on a Pick-up
Picture Richard Baltus
Geplaatst door Maximum Mini op 12:52