Wood & Pickett promotor - who are you?

Some photographs have been seen so many times that you take them for granted. But they may still be worth a closer look. This famous Wood & Pickett shot is definitely one of them, having appeared in a great number of publications. The Mini seems to be the one owned by comedian Laurence Harvey, but who's the man next to it? He always reminded me of actor Richard O'Sullivan, but I later read it was ex-hairdresser and Twiggy manager Justin de Villeneuve, which seemed to make sense. De Villeneuve must have been really close to the coachbuilt Mini scene in the late 1960s and seemed just the man who would drive one around London at the time. His hairstyle fitted in perfectly, too.

But then I saw a new magazine clipping, which mentioned not Justin de Villeneuve but John Paul as the man in the picture. And the caption added quite some detail with it, too. It mentioned: "John Paul, proprietor of the 'I was Lord Kitchener's Valet' group of boutiques, found that his Buick Riviera was too wide for narrow Carnaby Street. He was therefore specially 'fitted' for a £2,700 tailor-made Mini Cooper S by Wood & Pickett Limited, who specialize in luxurious Minis for luxury-loving folk. The Mini is painted Bahama Yellow to Rolls-Royce finish, and has a black, padded sliding roof, darkened glass, special racing wheels and tyres, stereo radio, etc... and four anti-theft devices!' Another clipping shows John Paul with a coachbuilt Mini - which certainly seems to be very special, although not Bahama Yellow...

So... Who is the great Wood & Pickett promotor on that well-known groovy picture? Is it Justin de Villeneuve, John Paul or Richard O'Sullivan after all? Please step forward! 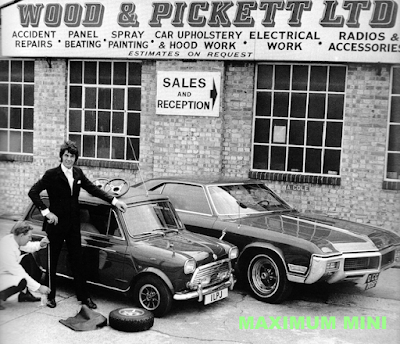 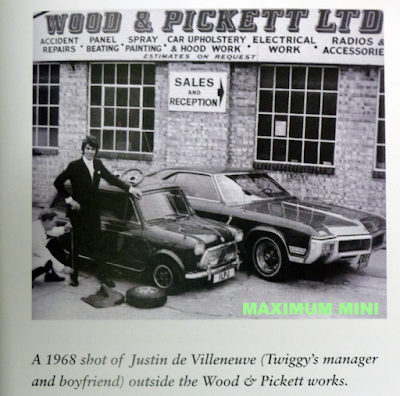 But not this one. It's said to be John Paul here, and the caption is rather detailed, too
Picture via Tony Hatchback 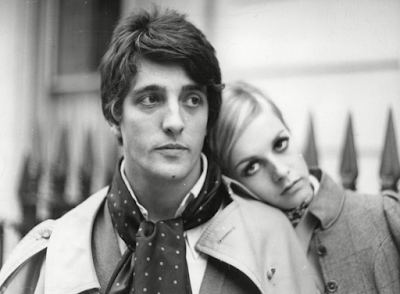 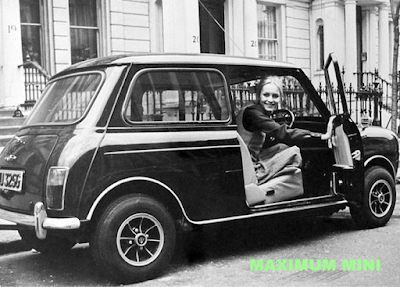 Twiggy was of course an icon of the 1960s... and she drove a coachbuilt Mini
Picture Jeroen Booij archive 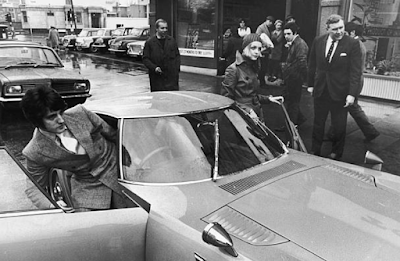 But de Villeneuve was into cars, also, or so it seems. Here stepping out of a Toyota 2000GT
Picture Getty Images 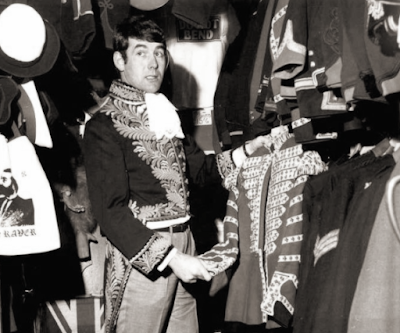 Over to John Paul, who ticks all the boxes, too. He ran a fashion shop in Carnaby Street, London, which was a favorite among all the stars in the late-1960s and early 1970s...
Picture Shutterstock 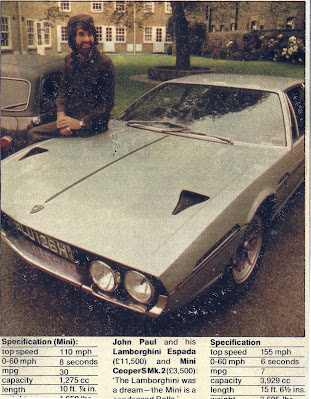 ...And he was definitely a motoring man, too, who did own a coachbuilt Mini,
as seen here together with his Lamborghini Espada
Picture via Tony Hatchback

So... John, Justin or Richard after all?
Geplaatst door Maximum Mini op 12:57