Stephen Callow recently contacted me about Timeire, the Special built by Tim Conroy (see here), but the conversation moved towards Peel Vikings soon and more particularly towards Vikings on the Isle of Man. Stephen owns a Viking himself and lives on the island.

But before describing his and other Peels from from the Isle of Man, let's have a look at one local car first that was perhaps a bit of a legend on the island for a while. Stephen sent over an interesting picture of that: "This was Mike Hewison’s Viking local autocrosser with some flames!"

I did recognize the car from a shot in The Filby Files, when Peter Filby wrote about it: "There's only one example left on the island and, as you can see from the action shot, it's got much the same problem as a Manx car, only at both ends. It's path in life is as a very quick autocross Special shared by James Howe and Philip Speedie. I know it's quick because the lads let me trash it around a large field recently vacated by several cows. Dung racing I think they call it."

I think Hewison must have crossed it after Howe and Seedie did? I also have a picture in the files of what is believed to be the body of this particular car, but I can't remember where I got it from, so do let me know when it was you. Stephen said: "Must be tucked away in the garage with Mike’s other Mini’s – he has a lovely Sprint and some nice Mk2’s." As always, more information is much welcome. 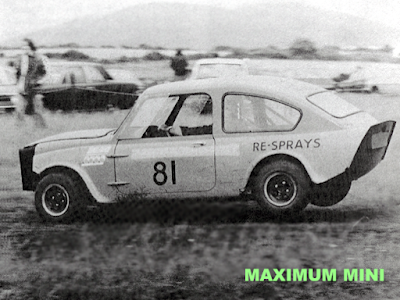 A Peel Viking autocrosser on the Isle of Man, as it was raced by James Howe and Philip Speedie
Picture The Filby Files / Jeroen Booij archive 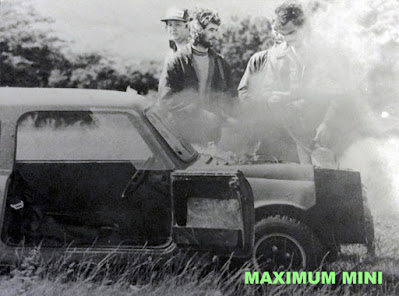 This surely must be the same car? "Mike Hewison’s Viking local autocrosser with some flames!"
Picture courtesy Stephen Callow 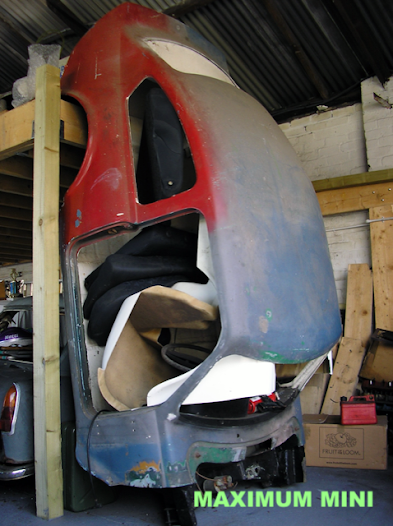 And is this the body of the same car again? I forgot who sent it to me...
Picture Jeroen Booij archive / source unknown
Geplaatst door Maximum Mini op 14:13