More good news about the Micron GT: the long-lost car that was found last year by your's truly (click here). And after finding the car, it's builder has now been located also! That's Brian Bray. I received a message from his son:

"Hello Jeroen, I have been given your e-mail regarding the Micron. I am Matthew Bray, son of Brian Bray the man who built it. I have never seen it as I was born in 1969 but I am a car enthusiast myself. Brian is still alive and kicking at 81 and I’m sure he would like to see it. Hopefully you can arrange something?"

Contacting the current UK based owner of the car was easy, but unfortunately he had to tell me the car is in France at the moment awaiting restoration. The idea was to bring it back some time ago but with the travel restrictions this hasn't happened yet. Let's hope it's possible to rejoin car and builder soon!

Next question was if Brian had some historical pictures of the car. Matthew replied: "I am sending you the only three pictures we have of the car. My father says he has no pictures of the build." But Matthew was kind enough to supply me with his dad's phone number so that I could ask him for some first hand information directly. Over to Brian Bray:

"I built it in a garage and my brother Rex didn't have a hand in it. But I sold it soon after it was finished to build the second car. That was a much better looking car with opening doors, the Micron Mk2. It didn't have a wooden chassis but a steel tubular chassis. Even the floorpan was steel. But it was also rear engined using a Mini engine, too. That car was never finished and not registered although I used to drive it around an airfield. It was almost finished before I sold it to fund my first aeroplane project. I sold it to two lads many years ago, but I can't remember who they were. I wanted to pick up flying and built my first first plane not much later. In the end I built six aeroplanes."

Matthew and Brian hope to find back pictures of the Mk2, which I am very curious about. In the meantime Matthew did come back to me with another lovely message: "I thought you may be interested to see the first place trophy my father won from Hot Car. Hopefully we may be able to see the car again one day should it return to the UK. Best wishes, Matthew." 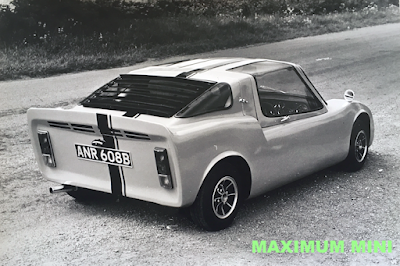 The Micron GT Mk1 as built by Brian Bray in 1968. The car was thought lost for decades
Picture courtesy Brian Bray 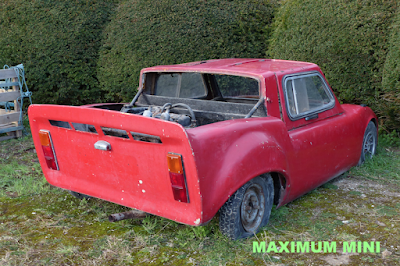 But there it was in rural Worcestershire in 2020, hardly changed and all complete!
Picture Jeroen Booij 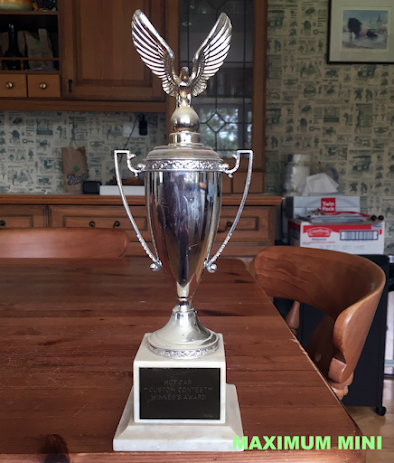 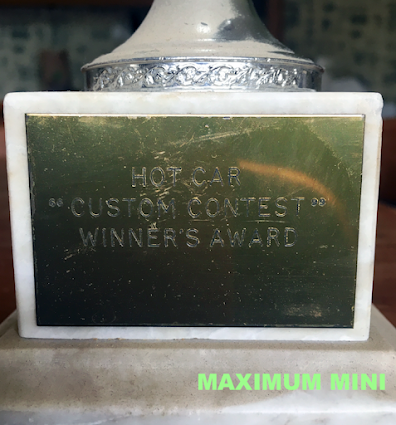 Brian built the car, won the contest and sold it next to fund the Mk2 - that one is still missing
Picture courtesy Brian Bray
Geplaatst door Maximum Mini op 15:08