Mike Brown alerted me about a picture he'd found on a Facebook page atypically named 'Sitting there Rotting on a Driveway'. And although the picture in question shows a vehicle that's not exactly on a driveway - it surely sits and rots! The chap who took the picture, Jamie Parnill, has no idea what it is but Mike added: "This looks like it might be Mini based". And I think he is right, too.

But what on earth is it? The windscreen looks flat but much of the rest of the glasshouse (Perspex?) is curved. Could it have been made for a movie..? In that case somebody will surely recognize it.

UPDATE 12 January 2022: Perhaps not Mini based after all? Nick Beaumont wrote: "Wheels look wrong for a Mini". Paul Wylde thinks it may well be Reliant Kitten based and he dropped me a picture of a Kitten chassis, which does look similar. He added: "I think they have relocated the fuel tank and dropped the chassis down a bit at the back to lower the rear door access". He's got a good point there. Opinions are divided as a Reliant restorer that I know isn't quite so sure though... 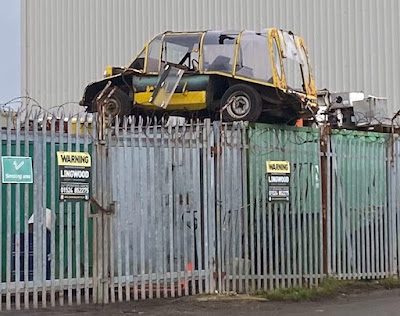 Mini based? Looks like it. But the whens, whos, wheres and especially the whys are unknown
Picture Jamie Parnill
Geplaatst door Maximum Mini op 16:03