Seen in a 1985 magazine: a tiny picture of a Stimson Safari Six. I don't think it's one I have seen before, looking to be registered 'GDW 531E'. Interestingly the snippet about the National Mini Day in June that year mentions the following: "Some of the more interesting vehicles at the really included the Mini Mk1 which starred in the BBC television series 'One by One' and a rare six-wheeled Stimson Safari Six, one of only 12 built. This bizarre machine has glassfibre bodywork on a space frame chassis and travelled to the rally straight from Zurich where it has received substantial television coverage."

UPDATE 18:00: Mystery solved! It's a young Colin Baines leaning against the car, which was his at the time (he's owned more than one!). Colin: "Ha! Yes this was me age 25 at the Mini Cooper Club meeting at Beaulieu, I'd just driven over from the International Mini meeting in Switzerland where it won 'Der Ungewöhnlichste Mini' trophy - (The Most Unusual Mini) on TV." Footage from it can be seen here. Thanks Paul and Colin! 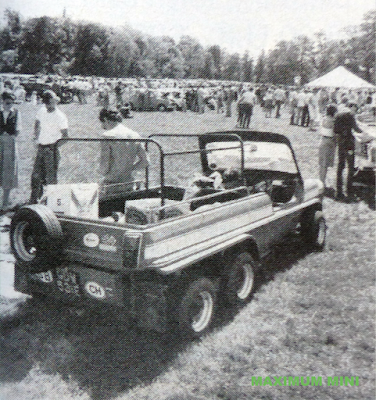