Last weekend I received more information about the Nota Mini in the form of a newspaper clipping of January 1964. So now I can tell the car that's raced at Warwick Farm on the pictures of last week's 'Urban Legend' are of a man named Ward Wilson who bought mister Buckingham's prototype. The clipping unveils many of the car's specification: "Australian motor sport enthusiasts have been crying for a cheap and economical sports car to run in this rapidly expanding category and it was left to Nota to turn out the prototype and get things going. (...) The Nota-Mini is a revolutionary car as far as Australia is concerned as it features a rear mounted Morris 850 layout and also it is the only car featuring this type of installation in Australia. (...) The 'Down-Under Deep Sanderson' is revolutionary in many respects and features a rear mounted Morris 850 motor/transmission layout which has been tilted forward on a slight angle, fitted with a Weber twin choke carb. and bored out to 948cc. These modifications gave a 8bhp boost in performance."

"The side-mounted Morris 850 radiator has been discarded and replaced by a cross-flow unit mounted in the nose  and water travels via flexible piping from nose to tail. (...) At present gear changes are performed by a long lever protruding from the engine compartment, but future models will have a linkage allowing the gear change to be made from the right-hand side of the cockpit with a short lever. A bid is at present underway to obtain a Cooper-Mini S type transmission unit which should give the car 'wings'.
The front suspension mainly uses Triumph Herald components, whilst the rear suspension is identical to the original vehicle, with Sprite steering. A far better appearance has been obtained by fitting Sprite 13 x 5.00 wheels, future models will also have Sprite disc brakes to improve the braking performance.
Guy Buckingham is aware that the rapidly assembled prototype is by no means the best-looking car on the market and he hopes to taper the nose and cowl in the headlights to give an appearance similar to the Lotus 19 sports car."

"A fully assembled Nota-Mini with a Morris 850 layout costs approximately £1,100 (Australian). A Cooper-Mini layout would add another £A100 but has the advantage of offering disc brakes on the rear wheels. By supplying your own mechanical components the cost is substantially reduced. The other option is to purchase the chassis/body components and complete the care yourself.
The Nota-Mini is an excellent and most economical way of entering into sports car racing, specially oif one can lay hands on a wrecked Mini-car. Good tuners should be capable of making the car really fly and if it is steadily decveloped it could be a class winner."

Now that's some information. I wonder if any more were sold? And how about this car, the 'Down-Under Deep Sanderson' prototype, then-owned by mister Ward Wilson - does it still exist? 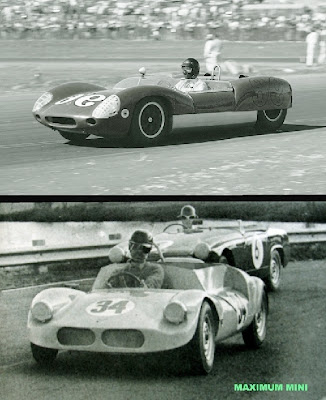 Future Nota-Minis were supposed to look like Lotus' type 19 (top)
But did these ever see the light of day?