After two British Mini derivatives that remain unfound, adding only to their legendary status (the Butterfield Musketeer - see here, and the Lawther GT - see here), let's go Down Under for my Urban Legend number three. It's the Nota Mini that deserves a bit of attention here. You don't know it? Not so strange as only one is likely to have been emerged, although one source mentions that two of these open two-seaters were built. This took place  late 1962/early 1963, making it defintely one of the very first Mini derivatives with the power plant places behind the seats. Only the Deep Sanderson prototype, dating back to late 1962 too, used a similar lay-out.

Anyway: the aluminium bodied Nota Mini was designed and built by Guy Buckingham who'd moved from the UK to Australia in 1952, to settle in Parramatta just outside Sydney and even closer to Warwick Farm racecourse. Buckingham started focussing on building race cars and came up with various racing and hill climbing specials, mostly one-offs. One of these came to life with a Mini-engine, reputedly from a crashed Cooper, and was used extensively for racing. The car eventually lead to the Nota Fang (or Nota Type 4) in the late 1960s, which became Nota's biggest succes with over a hundred units built between 1968 and 1975. What happened to its forebear remains unknown, though, like its technical specification that is mostly shrouded in mystery other then that it was Mini powered. From the three pictures that I have it seems the ultra low car uses non-Mini wheels (12"?). I wonder if it may still be tucked away in a shed somewhere out in that huge country..? 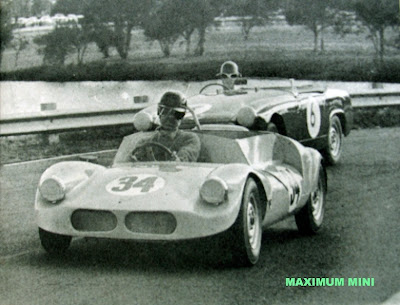 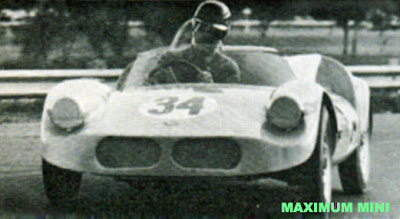 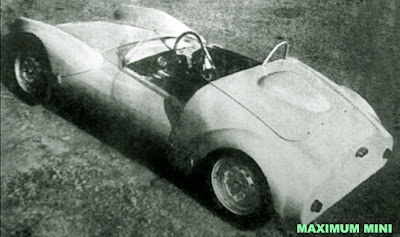