Whatever happened to JDB 260E?

One story leads to another, here on GTM-week. Richard Hawcroft wrote to me regarding yesterday's Cox GTM: "I think you are getting old Jeroen. The Japan red Cox - it's an early one. Flat back, one-piece engine cover, no door handles, early front. Don’t forget that the sills are longer on a Cox, so if you fit a Cox front to a later car you would either have to make the sills longer or mess with the front." Ahem. Well. He must be right!

But it also lead to a message from former Cox GTM oner John Thornburn. He dropped a line about his old car registered 'JDB 260E'. That number rung a bell and I found some nice old photographs in the files, with it being the aluminum bodied prototype, factory demonstrator, press car, plus the one raced by Howard Heerey. There's a brief spell of it in this 1967 video, too. Quite some history! John wrote: "I have written before in response to a request for info on early GTMs. In 1970 or '71 I purchased from a friend, son of a garage owner in North Wales, a yellow GTM, JDB 260 E, a most interesting piece of 'kit'. GTMs as well as other kit cars, being very much of a hands on pastime I soon became aware that although the front end was fiberglass while the rest of the car was aluminium. One issue I had with the car was that the hubs on the rear (front) subframe were held in place by the steering arms bolted to the subframe, okay when first done but very soon works loose resulting in variable tracking when taking the power off causing the car to snake at the rear for a moment, interesting at speed. I contacted Heerey Engineering, living about 6 miles from Midland Garage, to be advised that they had resolved the problem with, from memory, (this was when I was 19 and I'm now 64), a lower wishbone tapped into the hub at 2 points and fixed with bushes to the subframe. The reason for the preamble is that the may be if some use to someone. One of the Engineers made a comment that some part of the body where he was working near was aluminum to which I replied that with the exception of the bonnet it was all aluminum, only then to be told after he checked some more that it was the original aluminium body that that the moulds were taken from and the bonnet was damaged beyond repair in London when being driven to be exhibited at the Motor Show. No mention was made of other metal bodied GTMs."

Now that is most interesting. It leads to two questions: how about Nick Beaumont's part-aluminium bodied car? And also: whatever happened to JDB 260E? 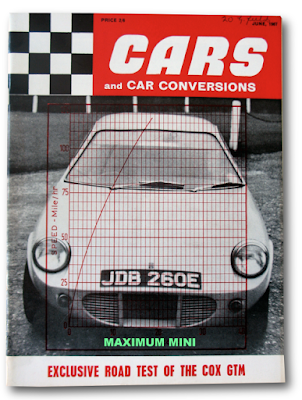 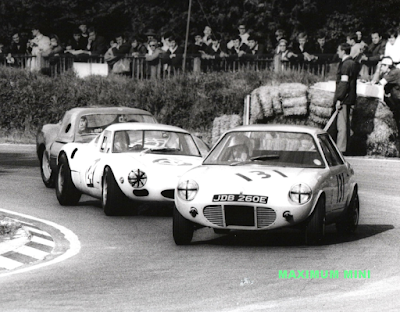 It was also raced by Howard Heerey, seen here chased up by a Ginetta and a Tojeiro Jaguar I think
Picture courtesy Richard Heseltine 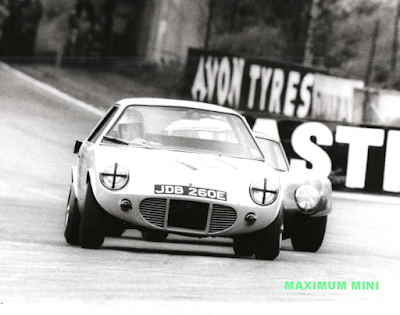 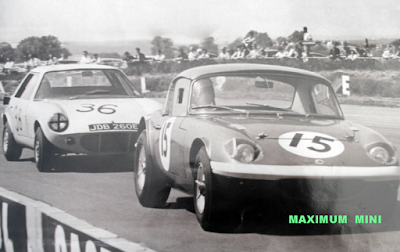 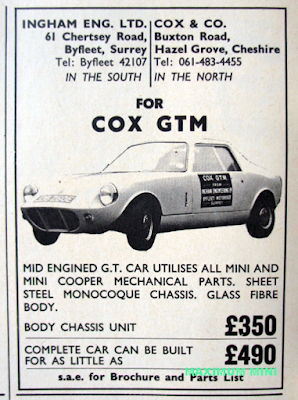 Ingham Engineering also used the car for advertising the Cox GTM. Where is it now?
Picture Jeroen Booij archive