It's there!
The final book in the Maximum Mini series, already now referred to as the Mini's 'Trilogy of Terrors'... 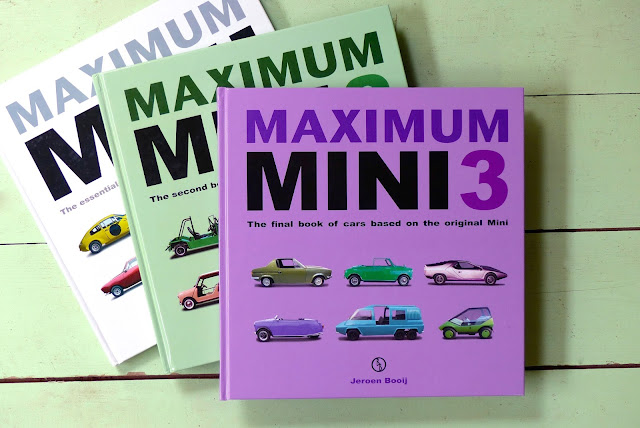 So, what to expect?
Another 128 pages full of Mini based cars, in a hardback similar in size and lay-out as the first two volumes. Yes. But that's where the similarities end. This one is quite different from what you have seen before.

Where all of the known and slightly lesser known cars were covered in detail over a two-page spread each in the first two books, this one features a lot more of them. 397 More Mini derivatives to be precise. Yes. 397. It has become a bit of an encyclopedia of obscurities and you'll be surprised to find out what else the Mini's multipurpose mechanicals brought forth. Trikes, twinis, racers, coachbuilt specials, beach cars, buggies, jeeps and a dragster, oh yes. But there are also also Mini powered fire engines, crop sprayers, ice cream vans, camper vans, motorkhana specials, miniature buses and wacky marketing mobiles. There is a Wood & Pickett trimmed four-door Mini which did the grueling 16,000-mile World Cup Rally in 1970 and a three-wheeler that was designed and built by the chief stylist of Rolls-Royce and Bentley in his spare time. There are Mini Moke based movie vehicles from Moonraker and UFO, The Persuaders and The Prisoner.
Apart from the UK the vehicles featured in this book originate from Ireland, the US, Canada, Australia, New Zealand, Scotland, Germany, Malta, Japan, Italy, France, Greece, Portugal, South-Africa, Belgium, The Netherlands, Spain, Barbados, Denmark, Uruguay, Chile and Switzerland.

Do notice that I am quite enthusiastic about it myself!

And it's for sale now, in a strictly limited edition of 600 numbered pieces only. Click here to buy it and I'll send it out to you in a purpose-made box. Let me know if you want a dedication or autograph. Oh - and what you think of it after it arrived!