Back on track (literally!)

May is here and the season has begun. But before I start telling what's happening a little explanation may be needed. I haven't posted here for over six weeks and that was mostly due to the new book that didn't come out before some time-consuming work on it: Maximum Mini 3. Available directly from your's truly from next week-on. Oh - there was more to say about all the hick-ups that come with publishing, but I won't bother you with that. Most important is that the book has come out beautifully with very good initial reaction from the lucky few who have already seen it at Blyton Park and / or the Stoneleigh Kit Car show, where I was last weekend. In fact the book was quite literally hot from the press at these events, as I picked up the first copies from the printer only to drive on directly to the ferry in order to reach the UK.

Blyton was great as always, as it was windy as always! But the Maximum Mini display had a good turnout with two Mini Jems, two Cox GTMs, two Midases, a Mini Marcos, a Unipower GT, a Nimbus Coupe and an Ogle SX1000. The latter is the actual car that was driven by Sir John Whitmore in the USA in 1963 and has recently fully been restored by Guy Loveridge. In fact the paint had hardly dried, but that didn't keep Guy from me entering it to the track! Apart from a few miles I made some years ago in a slightly later blue car, this was the first time I really got to assess the SX1000, and it was great! I will write more about it later, as I will make a more comprehensive report on Blyton Park and Stoneleigh. Don't worry, it won't take as long this time. 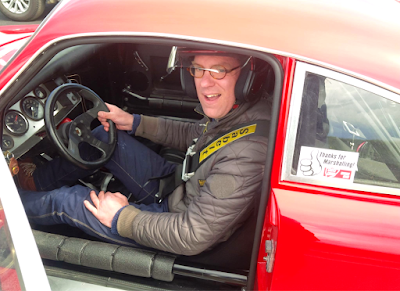