Some time ago, Danny Craig dropped me a line from Virginia, USA, writing that his father in law passed recently. "So we are dealing with all the stuff that comes with it." Among it, there is a 1967 Unipower GT. And there's no doubt I was eager to learn just a little bit more about that. Danny got back on it several times, writing "I didn't realize how much work it was going to be moving the cars and assosiated parts... plus all the tools and equipment. A little overwhelming! Gotta talk to his ex-wife and get his daughters to take a walk down memories lane…" And by now, he did just that. This is his full report:

"My father in law, Dennis Tarkir, purchased the Unipower from a dealer in Maryland. I'm pretty sure the city was Gaithersburg. I think I read that this dealer imported all of the Unipower that made it to the USA. From what I understand, Dennis found the car in 1971 and fell in love. At the time he was unable to afford it straight out, so he found a friend who was coming home from college break. They both went in on the Uni with the arrangement that his friend would drive it while home from school. This gave Dennis enough time to make the money to buy his friend out. Dennis is the original owner as far as paper work is concerned." 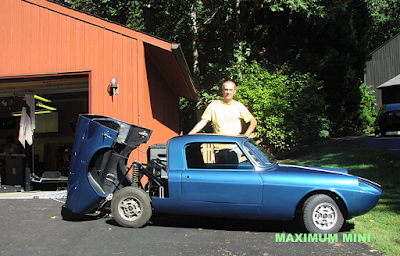 Dennis Tarkir with the Unipower GT in 2008. It was only finished last year
Picture through Danny Craig

"He would tell me stories about visiting his girlfriend at her apartment, having to park at the beginning of the complex because he was unable to get over the speed bumps in the Unipower. He constantly would get pulled over by the police. Not for doing anything wrong… 'What the he'll are you driving?', was normally the first question they would ask. I remember him telling me that he had a real hard time registering it in the state of Virginia due to the vin number being so short. The first time he tried, it had gotten to the managers manager to get approval. They finally approved the request for registration, mainly because they didn't known what else to do. He also said that this go around trying to get it registered this year was also a little trying. And being that Virginia issued the registration in the 70s it came down to the manager at the DMV saying... I guess we have to since they did it before. It now has Virginia antique tags and is legal to drive on the roads." 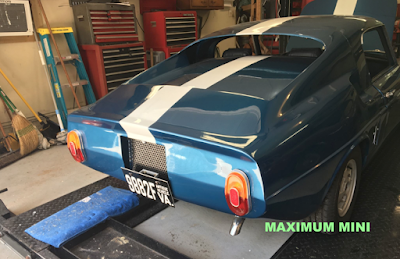 Dennis went through some issues to get it registered. It's on Antique plates now
Picture through Danny Craig

"There are chunks of time missing in this Unipower's history. From what I have gathered, some time in the early 80s, Dennis started the complete tear down restoration due to the common issues of the frame rott and the over heating issue. During this time the Uni was stored in a warehouse for a time, while Dennis lived in a couple different apartments. Once he purchased the house seen in the photos, he kept the Unipower in the garage. At some point he had it shipped to Florida to be painted. At the time in the Fairfax area, he was having a hard time finding a painter who was willing to touch it without charging an arm and a leg. He found a Corvette painter who was. And so it was shipped." 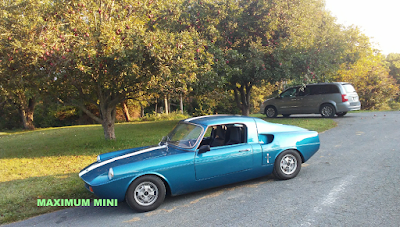 Painted in real American racing colours, this reflects a miniature GT40 rather then a 'Mini Miura'
Picture through Danny Craig

"When I met Megan, the oldest of Dennis' twin daughters, the body, lights and interior were pretty much done. The frame was redone, and the cooling system was changed to take care of the over heating issue. A small electric pump was added to the system to increase the flow at idle. At the time he was also restoring his dad's classic Mustang and also had an old XKE that he was working on. He would bounce from car to car depending on which parts came in." 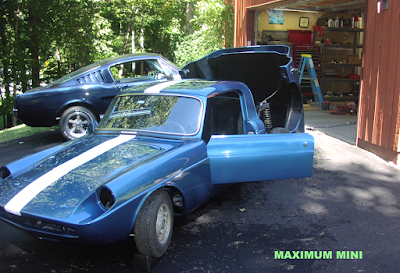 Work is underway in Dennis Tarkir's garage, his father's Mustang in the background
Picture through Danny Craig

"Not long after Megan and I started dating, they moved to Manassas, Virginia. The mustang was sold, the Unipower engine was close to being put back together, and he towed a '71 Lotus Elan plus 2S home from Texas. Saved them from the Texas heat after 20 years of sitting in a field. The Uni was drivable in late 2016, but it still had some issues. He replaced the three master cylinders. The one closest to the drivers side door was too tall. One of the hardest parts about restoring this car is finding parts. In the end he had to cut a half inch out of that one master cylinder in order to get the hood to close. He was also having a hard time with finding carburetors that worked well. I remember that at least two needed replacing, both also on the drivers side." 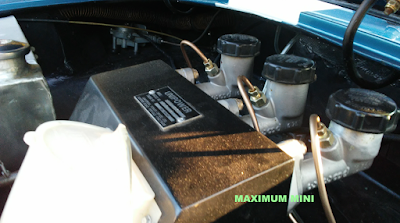 Note closest master cylinder is shorter. Dennis had to cut it to get the hood closed
Picture through Danny Craig

"I also remember him being frustrated that he couldn't find any place where he could get the pedal pads. Frustrated to the point that he bought a 3D printer, and started making molds to try to duplicate the originals. In the end, they looked great, but the plastic became too hard over time and wore out once he started driving it on the road."

"We found lots of papers for the car. Sale receipts, emails to different people all over the world. He was pretty good about keeping track of stuff like that. I will send you pictures of some of that stuff if you like. As of now they are still packed up. We haven't made it that far in our unpacking. Dennis was truly in love with this Unipower. I would say that he got it restored to 90% there are some things that need tweeted and adjusted. He did not reinstall the windows, as he saw it as a fair weather car. The cars and trucks here are so big in comparison that driving in the rain or snow would be kind of dangerous. The Uni would get lost in the road spray.We still have the door windows and rear plexiglass window. I remember reading an email conversation with a guy in England that had the mould for the rear window, I think. The one for this car is discolored and has some cracking. Frankly I think it looks better with out that installed." 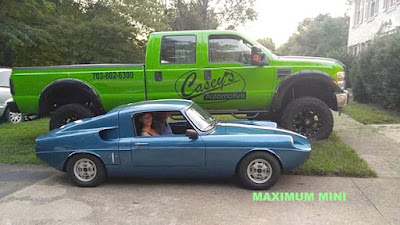 Now that Dennis has passed, we had to drive it to Marshall, Virginia. Which was the longest single trip it has made. The actual mileage is still under the 40,000 miles. This car is a blast to drive. And a little scary at the same time. Being that I grew up in the time of power assisted brakes and steering. And with no experience with a rear engined and rear wheel drive set up. Not to mention having to lay down to drive it. I understand why Dennis loved this car so much." 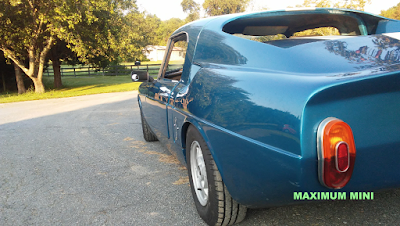 The original rear window was never reinstalled. "Frankly, I think it looks better without", says Danny
Picture through Danny Craig